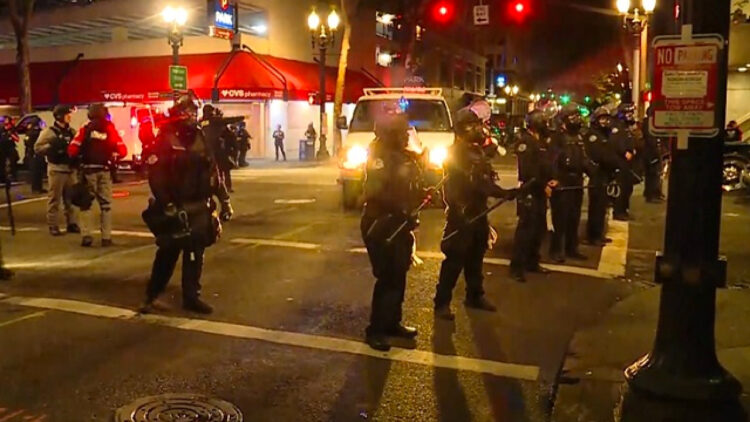 Over 50 officers with Portland Police Bureau’s Rapid Response Team, which is tasked with responding to protests in the city, voted to resign from the unit en masse.

“Last night, all of them, the police officer, detective and sergeant members of our Rapid Response Team met and as a result of that discussion, voted to — as a group — to offer their resignation from their assignment with the Rapid Response Team,” Acting Portland Police Chief Chris Davis said.

“These people will all still be Portland Police Bureau employees, but the Rapid Response Team is a voluntary assignment within the police bureau. This represents approximately 50 people that we’re talking about,” Davis continued.

The mass resignation from the unit appears to be in solidarity with officer Corey Budworth, who was indicted on assault charges after using his baton on a rioter in August of 2020. Another member of the unit, Detective Eerik Kammerer is currently being investigated by Oregon’s Justice Department for his use of force as well.

“I think that really this is a culmination of a long process and it’s not just an indictment that caused this to happen,” he said. “They’re not feeling like the sacrifice they’ve made necessarily has been understood very well,” Davis added.

“Police officers are out doing their job during some of the most violent and sustained protests that we’ve ever seen in Portland, or anywhere in the country,… And yet a police officer who is doing his job, trying to protect not only community members, other police officers, and property, is indicted,” Turner said.

“I have confidence that the Bureau will continue their mission to maintain public safety. In the meantime, my office will continue to focus on the fair and just prosecution of criminal matters. We cannot expect the community to trust law enforcement if we hold ourselves to a lower standard,” District Attorney Mike Schmidt said in a statement following the mass resignations.

Schmidt also announced there are other officers currently being looked at for their use of force during last summer’s riots. “We have looked at multiple cases already and I think there are still several more that we’re continuing to look at,” Schmidt told local media.

The Independent Chronicle reached out to Schmidt’s office for comment but did not immediately receive a response.