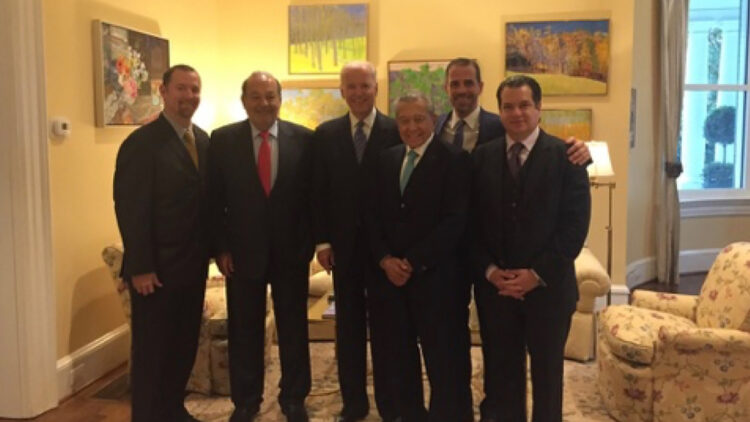 “I have never spoken to my son about his overseas business dealings,” then-candidate Joe Biden said in Sept. 2019. However, photos from November 2015 reveal that he did, in fact, meet with his son’s various business associates, including Mexican billionaire Carlos Slim, who Hunter was working with on deals in Latin America and Mexico.

The photos were obtained from Hunter’s laptop and provided by Robert Costello, an attorney for Rudy Giuliani. The photos are time-stamped as being taken on November 19, 2015.

Emails sent the following day by a member of Hunter Biden’s firm Rosemont Seneca corroborate Slim being in Washington, D.C. at the time, including a Politico report headlined, “Spotted: Carlos Slim in the lobby yesterday morning of the Georgetown Four Seasons.”

One of the photos shows Biden and son Hunter standing next to Inerjet’s CEO Miguel Aleman Magnani and Hunter’s associate Jeff Cooper who was a previous managing partner at the law firm SimmonsCooper which is known for being a big Biden donor.

The New York Post reported that Cooper joined the vice president’s “entourage on Air Force Two to Mexico in 2016 when he and Hunter were trying to negotiate an ill-fated petroleum deal with Aleman Magnani.”

There will eventually be a “point the Biden White House will have to confront evidence of the president’s involvement in his son Hunter’s shady overseas business dealings, says Miranda Devine, a columnist for the New York Post.