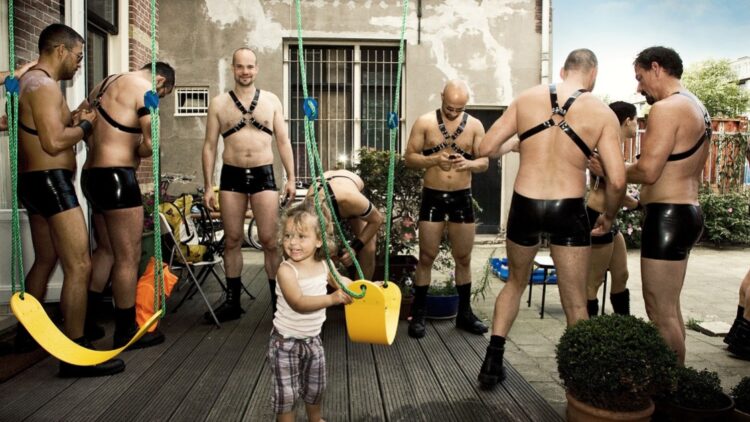 Pride Amsterdam chose a photo of a young girl standing outside surrounded by a large group of nearly naked men, wearing leather and rubber outfits as their most “aesthetic” photo to honor 25 years of holding Pride events.

A translation of the group’s press release reads, “The call to submit the most iconic, meaningful and aesthetic photos for 25 years of Pride Amsterdam received a massive response. Out of more than 13,000 entries, a preselection was made by the Pride Ambassadors that are included in the outdoor exhibition ‘Celebrating Diversity.'”

“From these 50 images, the professional jury led by Cornald Maas has chosen the winners. The best photos for 25 years of Pride Amsterdam were taken by Geert van Tol, Romy Fernandez and Jan van Breda. They each receive a prize of € 2500,- and their photo is included in the history books on the way to the next anniversary,” the release continued.

‎”This is the photo in the category ‘Most aesthetic photo’, taken by Jan van ‎Breda.”

“Most aesthetic Pride photo ‘depicts what will hopefully remain self-evident,'” AT5 tweeted, along with the image.

In an article explaining the meaning behind the photo, the jury in charge of judging the pictures says, “This photograph, in his composition – child in the foreground, depicts men preparing for Canal Parade in the background, everyone busy with their own activities and fascinations- sublime which will hopefully remain self-evident: that, unhindered by prejudice, and almost unsuspecting, we can and can all coexist.”

Reactions to the Pride organization’s decision to use a photo with a little girl surrounded by grown men wearing fetish outfits were mixed across social media.

“This photo from a Pride event in Holland has won an award from the organizers for being “iconic.” It shows a child in the foreground while a group of men in fetish sex gear stand in the back. A woman claiming to be the girl’s mother said she opened her home for the men to change,” said journalist Andy Ngo.

“Kids and kink don’t mix. Can we all have the decency to agree on that?” replied one Twitter user.

“What’s the problem? It’s not like the kid understands what fetish gear is,” replied another.

“I just read it and I find it outrageous!! If you want to dress up/or down like this go right ahead but do it in private or at least not in front of kids!!” replied someone else.

“We’re basically 2 years away from ‘oh yeah pedofilia[sic] tho thats like a choice bro..read some new studies its actually super good for children to learn sex this way you know,'” said another.