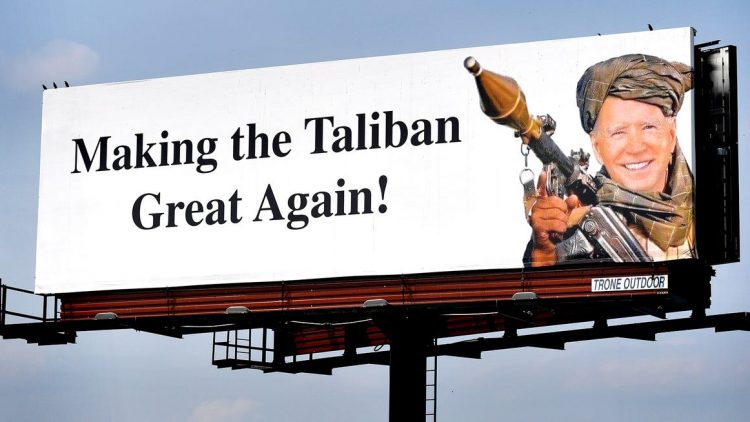 The man responsible for putting up a popular billboard in York County, Pennsylvania with an image of President Joe Biden and the words, “Making the Taliban Great Again,” has revealed himself.

“I believe the pull-out was done very badly,” former Pennsylvania GOP Gubernatorial candidate Scott Walker said Tuesday, regarding why he decided to put up the billboard. “I think the president thinks he might have made a good decision, but I think he made a very bad decision.”

Since the billboard was put up, many have posted its image on social media, causing it to be shared around the country by both supporters and opponents of the President, leaving many local Republican officials asking who paid for the sign to be displayed along Interstate 83.

When asked about the billboard by the York Dispatch, Wagner did not mince words about his involvement.

“I’m not hiding from anybody, and that’s how I feel,” he said, “and I decided to put the billboards up.”

“I think we’re going to pay for this,” Wagner said of the botched withdrawal from Afghanistan. “I think probably in the form of more terrorist activities around the world and possibly this country.”

Wagner says he also paid for almost a dozen other, similar billboards, totaling around $15,000, to be displayed all throughout Pennsylvania.

The advertising company that oversees the billboards said they remain neutral when it comes to politics. However, they don’t refuse service to anyone – so long as the ad doesn’t contain any “cuss words or slang for cuss words.”

“Listen, we stay in the middle. If people want to call up and put up a billboard like this, as long as there’s not any cuss words or slang for cuss words, you know, we will do it,” said Brian Scott, vice president of Trone Outdoor Advertising. “If somebody wants to call up and put a billboard up praising Joe Biden, we will do that as well. But we he haven’t gotten any phone calls to do that.”

Local Democratic Party officials say the billboard should be taken down for stoking “the flames of vitriol and hate” caused by Donald Trump.

“While we are entitled in this country to freedom of speech,” York County Democratic Chairman Chad Baker said, “this billboard continues to fuel the flames of vitriol and hate that has clearly stemmed from the previous administration in the White House and by many of the local state and congressional legislators.”

Wagner says billboards like those he paid for are par for the course in today’s political climate and believes the message resonates with many people.

“I think just the state of where we are right now in the country,” he said. “I think it’s certainly sensitive, and I think that’s why maybe you see it on social media as much and everything that’s going on in Afghanistan.”