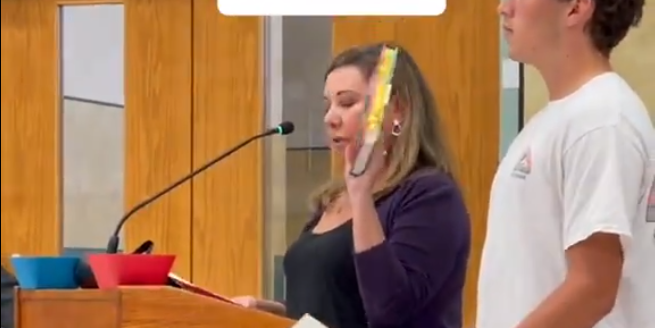 A video of a Texas mom went viral after she excoriated her local school board for sexually explicit content in the books provided to her children at school.

“Who normalizes sex acts between fourth graders?” she raged at the board. “I’ll tell you who: pedophiles.”

She explained to the board that she had asked her children to see the books they had brought home and was utterly disturbed by the content. She read some of the quotes from a particular book, “Lawn Boy,” by Jonathan Evison out loud in the meeting. The full video can be viewed here.

“What if I told you I touched another guy’s d**k? What if I told you I sucked it? I was 10 years old, but it’s true. I put Doug Goebbel’s d**k in my mouth. I was in fourth grade. It was no big deal, he sucked mine too. And you know what? It wasn’t terrible.”

Other parents attending the meeting held large photos of school board members with captions “Vote Out” and “Resign.”

“He talked about old times at the church, but never mentioned our penises or the fact that he never said ten words to me after our little foray in the bushes. Not a single reference to holding or tugging or sucking d**ks. All I could think about while he was chatting me up was his little salamander between my fourth grade fingers, rapidly engorging with blood,” the mom read aloud from another chapter of the book.

The mom accused the school of sexual harassment. “What sort of educational environment do you think the sexually graphic book selections create for my children, or for any child for that matter?”

This is not the first time that parents in the Leander Independent School District have objected to explicit curriculum. In March, the Daily Wire reported that “Students as young as 13 in Leander Independent School District, Austin, TX, have been exposed to graphic sexual content as part of their course work, including graphic verbal depictions of gang rape and other sexual acts.”

Parents became aware of the issue after their children told them about the content. Upon bringing up the issue to the school, these parents were met with harassment and called “religious zealots,” “bigots,” “racists,” and “d**ks.”

“Some of the people speaking out have received anonymous cardboard penises in the mail with anti-Christian messages calling them names such as c**t,” one parent said. “Others have received dead animals on their porches.”

Bruce Gearing, Superintendent of the Leander Independent School District, did not immediately respond when the Independent Chronicle contacted him for comment.

UPDATE 9/14/2021: A representative of Leander ISD responded to Independent Chronicle, stating that the particular book referenced in the video is not part of required reading but is available in some high school classroom libraries. An earlier version of this story indicated that “Lawn Boy” was required reading.

The district provided a statement that included the following information: “We have processes in place for parents to formally request books that they have concerns about. District staff has reached out to the concerned citizens you mentioned over the last several weeks to outline the ways to bring those concerns to the attention of the district and the Board of Trustees, as well as how to request a review of those materials. We have processes in place to review concerns and work with families. To date, no one has formally requested a review of that title.”