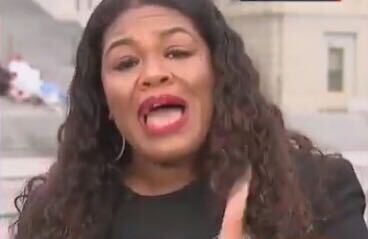 Rep. Cori Bush (D-MO) lashed out on Wednesday, following the pardon of Mark and Patricia McCloskey for the gun-waving incident that occurred last year as Black Lives Matter protesters trespassed on their St. Louis property.

“Mark McCloskey is an absolute liar,” Bush said. “He has spat on my name. And because of that, his day will come.”

The governor of Missouri pardoned the McCloskeys on Tuesday for the widely-publicized incident in June 2020 when the McCloskeys waved guns at Black Lives Matter protesters who invaded and trespassed on their property.

Bush participated in the Black Lives Matter protests in St. Louis and was reportedly nearby when the incident occurred. McCloskey identified Bush by name in reference to the incident, calling her “the Marxist liberal activist leading the mob through our neighborhood.”

“Absolutely unbelievable,” responded Bush. “There are pardons we have been asking for, pardons that should actually happen in Missouri, and that was not one.”

Per the Independent Chronicle, Mark and Patricia walked out of their home in June 2020 and were confronted by hundreds of BLM protestors. The McCloskeys alleged that the protestors broke down their home’s front gate and began to stream into their yard. Mark says he tried to tell them to leave, repeating that they were trespassing on private property.

“As soon as I said the words ‘private property,’ it seemed to enrage them,” Mark said. “I ran in, got my rifle. I started standing on the wing of the patio, saying, ‘Private property! Get out! Get out of here!’ They kept pouring in. That seemed to make them want to come forward.”