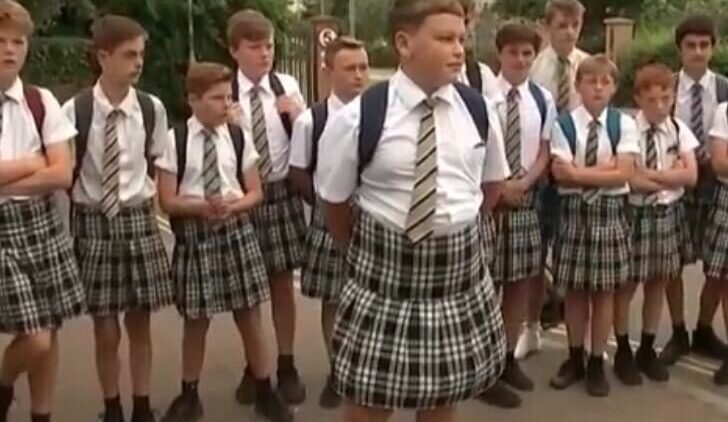 A group of schoolboys wore skirts to class during a heatwave to protest their school’s ‘no shorts’ rule for students, particularly on hot days.

Their choice of apparel was met with varied reactions as they walked the halls of Poltair School. “It was a mixed bag. Some teachers thought we were messing about. But there were others who cheered us on. There were a group of Year 8 boys who were clapping and cheering us,” Adrian Copp, a student at Poltair School in St. Austell, U.K. said this week.

Since the school policy allows students of any gender to wear skirts, the boys decided to attend class in skirts to draw attention to a policy they feel is outdated.

When temperatures reached over 86 degrees in St. Austell, a dozen students led by Copp bought inexpensive pleated skirts and put their plan into action.

Adrian, along with classmates Connor Humphries and Scott Penman, plans to wear skirts through the end of the week. “I found it a lot cooler definitely. It’s really uncomfortable wearing trousers in this heat,” he continued. “We just want everyone to have the option to wear shorts in this heat and that goes for the girls too.”

The school rules state that boys must wear trousers that fall to the shoe line. “These must be of a style that is complementary of a blazer. Skirts must be pleated and sit no higher than a credit card’s width above the knee.” Neckties are mandatory and color-coded by student teams. Nail polish, rings, necklaces, and bracelets are all prohibited. Students must wear formally styled hair of “natural color,” and wearing makeup is discouraged.

Adrian’s mother Donna spoke out in support of the boys’ crusade for weather-appropriate dress codes, saying that the no-shorts policy is a longstanding issue and she is glad to see the boys advocating for change. “When he went to primary school he would wear shorts no problem. But for some reason, it hasn’t been allowed in secondary schools.”

Donna, a mother of 4, also commended her son’s decision to “play by the rules” while protesting the dress code, acknowledging that the school does not specify that the student be of a particular gender in order to wear a skirt. “I’m so proud Adrian has the guts to take a stand,” she said.

Poltair School did not immediately respond to a request for comment.