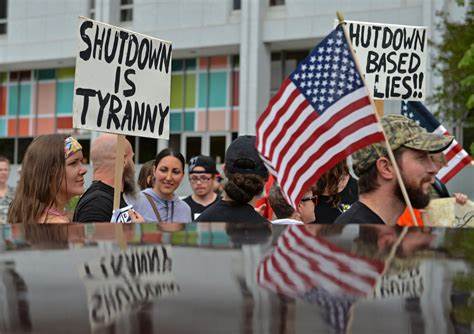 A new Scott Rassmussen poll found that a majority of voters believe that government-imposed lockdowns to combat the spread of the coronavirus did “more harm than good.”

“Looking back over the past year, 57% of voters believe that shutting down businesses and locking down society did more harm than good,” Rasmussen said Monday. The survey found that 36% disagree and 17% are not sure.

Rasmussen said the number of Americans who feel lockdowns did more harm than good was up from May when most voters took the opposite view.

“The current totals include 32% who Strongly Agree that the lockdowns did more harm than good and 17% who Strongly Disagree,” Rasmussen said.

Among party lines, Republicans overwhelmingly view lockdowns as more harmful than good, with 88% while 49% of Independents also agreed. Meanwhile, 52% of Democrats took the opposite view.

Government-imposed lockdowns were widespread across the country during the height of the coronavirus pandemic. Many Governors and local officials imposed stay-at-home orders, mask mandates, and now vaccine mandates to combat the spread of the virus.