Milley defends actions, testifies calls to China were not secret 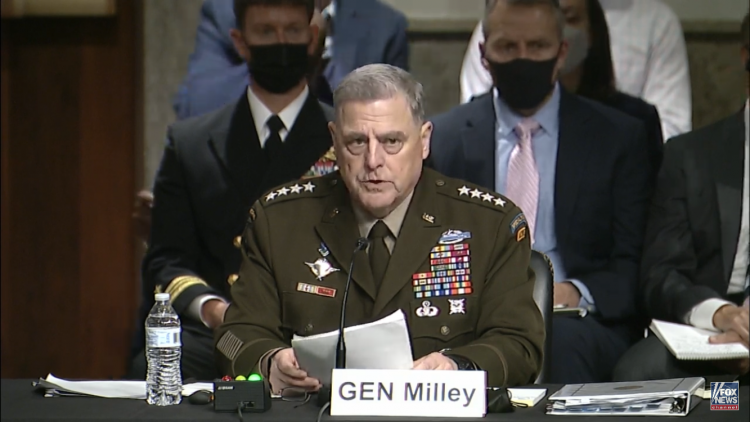 Joint Chiefs of Staff Chairman General Mark Milley says he did nothing wrong with respect to his calls to China, that he was told to de-escalate China’s fears of a U.S. attack, and that Trump’s inner circle was fully apprised of his activities.

“I know, I am certain, that President Trump did not intend to attack the Chinese,” Milley testified to the Senate Armed Services Committee. “And it was my directed responsibility by the secretary to convey that intent to the Chinese.”

“My task at that time was to de-escalate,” he continued, citing intelligence which led him to believe that the Chinese were extremely nervous about the possibility of an attack from the United States.

“My message again was consistent: Stay calm, steady, and de-escalate. We are not going to attack you.”

Claims made in a book published by Robert Costa and Bob Woodward sparked the Milley controversy, especially after Milley admitted having spoken with one of the authors prior to the book’s release. During Milley’s testimony, he spoke of his communications with Chinese General Li Zuocheng on October 30, 2020 and January 8, 2021 in response to accusations that he broke the chain of command, with some even suggesting that his reported actions were treasonous.

Milley made the first call in question juist days before the 2020 presidential election, and he stated that it was made at then-Defense Secretary Esper’s direction. He also maintained that there was nothing secret about the call, and eight people sat in on it. He insisted that he “read out the call within 30 minutes of the call ending.”

“On 31 December, the Chinese requested another call with me,” Milley said, stating that the call was coordinated for January 8 by the Deputy Assistant Secretary of Defense for Asia-Pacific Policy. Milley said that eleven people sat with him during that call. He also claimed to have immediately briefed Secretary of State Mike Pompeo and White House Chief of Staff Mark Meadows after the call took place.

The book claims that Milley spoke to Speaker of the House Nancy Pelosi and agreed with her during the call that then-president Trump was unstable. During his testimony earlier today, Milley refuted the claim, saying again that his goal was to assuage Pelosi’s fears about President Trump possibly utilizing nuclear weapons, and stated during the call that his job was not to assess the president’s mental health.

“I sought to assure her that nuclear launch is governed by a very specific and deliberate process. She was concerned and made various personal references characterizing the president,” Milley told the assembled Senators.

“I explained to her that the president is the sole nuclear launch authority and he doesn’t launch them alone. And that I am not qualified to determine the mental health of the President of the United States. I repeatedly assured her there was no chance of an illegal, unauthorized or accidental launch,” he continued.

Again, Milley detailed the aftermath of the call, which he claims included a meeting with his staff and informing Acting Secretary Miller of Pelosi’s call.

“At no time was I attempting to change or influence the process, usurp authority, or insert myself in the chain of command,” Milley said under oath. He offered full cooperation during the investigation, including any phone logs, witnesses, emails or other information he could provide to shed light on the events that occurred.