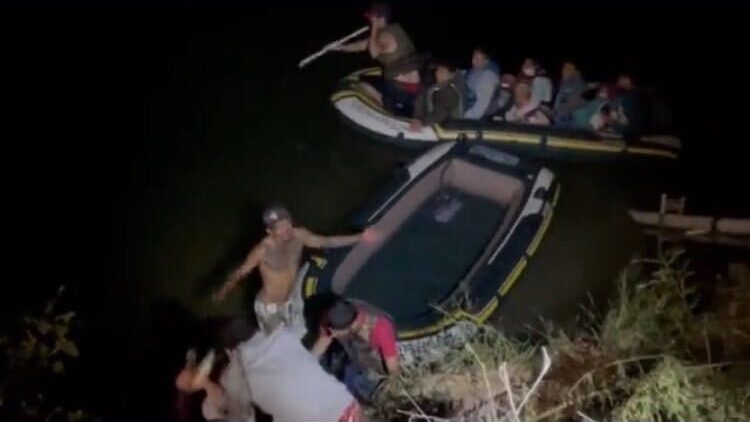 New footage highlights insecurity on the southern border, and shows migrants laughing and joking as their rafts make their way from Mexico to illegally enter the United States.

“It is nonstop, this happens every single night in Roma, it has been going on for months, and this is only one tiny part of the border. Hundreds crossing here,” said Fox News reporter Bill Melugin.

Melugin has been a leading figure in exposing the real situation at the border. Although most of the media quickly moved on to other topics, Melugin, who was also instrumental in obtaining video footage of the thousands of Haitian migrants under the bridge prior to crossing the Rio Grande into the U.S., is back with more footage and a reminder that the crisis is not over.

Melugin, who is with the Texas National Guard at the border, posted footage on Twitter, saying, “The sun hasn’t even gone down yet and we are already seeing multiple rafts full of illegal immigrants crossing over into the US.”

“The spot we are in is the same spot where cartel gunmen w/ AK 47s were taunting National Guard soldiers the other day. The soldiers tell us the gunmen were racking the slides on their weapons and were yelling in Spanish that they should shoot them. @FoxNews,” Melugin continued.

During this first year of the Biden administration, the southern border has been plagued with crises. Illegal crossings have skyrocketed with a 450% increase in June alone as compared to last June, and DHS chief Mayorkas admitted that upwards of 12,000 illegal immigrants have been released into the U.S. interior.

Controversy has raged over the administration’s Covid-19 testing protocol for migrants, the overcrowded holding cells have became hotbeds for the spread of Covid-19, and a federal migrant children’s shelter was exposed as a site of sexual harassment. “Border czar” Kamala Harris did not visit Texas until June.

In September, shocking footage showed 15,000 migrants, mostly Haitians, huddled under a bridge as they waited to cross the Rio Grande into the United States. During that time, the administration also accused mounted Border Patrol of “whipping” black migrants when in actuality the “whip” in the photo that sparked the outcry was just one of the horse’s reins.

“I’ve been patrolling the borders since Clinton was the president, and I can tell you personally, that the policies that have been in place were by far the best under President Trump, and President Biden completely and totally dismantled all of those policies,” NBPC President Brandon Judd told Fox News host Sean Hannity.