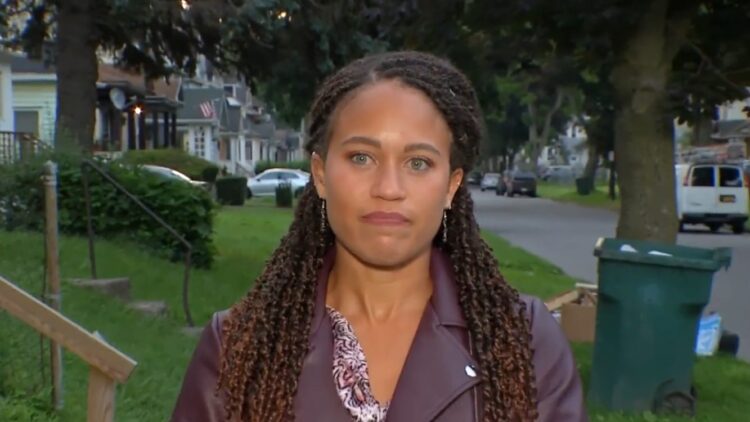 Two men made advances towards a female reporter with comments about her race and appearance moments before a live report.

Brianna Hamblin, a local news reporter, was preparing to tape a segment on the street in Rochester, NY, on Friday when the two men passed by and offered unsolicited comments. “See, that’s why I can’t be left alone with a Black woman,” one of them says. “You are sexy as f—,” he adds.

Hamblin shared a video of the encounter on Twitter, saying, “Being hit on and harassed as a woman, especially as a woman reporter out in the field, happens so often you learn how to roll with it or ignore it. This time it happened to be recorded only seconds before my hit. There are A LOT of things wrong with this.”

The incident began as one man observes, “You look nice, by the way.” Hamblin quickly responds, “thank you,” and looks down at her phone. The second man chimes in, saying, “You’re beautiful as hell, goddamn.”

The second man asks, “Why you over here on camera, though?” and she responds by telling him, “Go find a TV and watch Spectrum News. You can find out.” She notes, “This is channel 9 and 1, usually.”

The second man continued rambling about how he can’t control himself around Black or “Mulatto” women. “Because I can’t stand these f—–g white girls,” he adds.

“All right, we are done here,” Hamblin says. “Have a great rest of your day.”

As the video ends, visibly disturbed, she says, “Oh my god.”

Hamblin had a lot to say on Twitter afterward. “‘Oh, men these days just can’t give compliments.’ No. The first man’s ‘you look nice’ as he continued to walk away is fine. It’s the 2nd man who took this to another disgusting level it didn’t need to be.”

“The audacity of the things men say to me never ceases to amaze me. What makes you think women want to be talked to that way? In no way is this endearing. It’s uncomfortable. It’s gross,” she continued.

“Being a Black woman in this industry has its own headaches, but talking down on one group of women to “praise” another group is NEVER okay. It just shows you have a disgusting fetish based on stereotypes, which is just as racist.”

“To everyone surprised at this behavior, I promise you this does not shock a single female reporter. Happens to us all the time,” said Lynnanne Nguyen, Fox 4 News reporter.

Reporter Blair Sabol expressed gratitude that Hamblin was not alone during the encounter, a sentiment many women echoed on Twitter. “So glad you had a photog out there to back you up. How uncomfortable! You handled it so well, though. Especially right before a hit.”

“I was LUCKY I had @barstow_scott with me. At my last job, I had to deal with this type of stuff ALONE, like most women MMJs. It’s not safe. It’s scary,” said Hamblin.