McCarthy urges Pelosi to strip Omar of committee assignments, says Republicans will if they take back the House 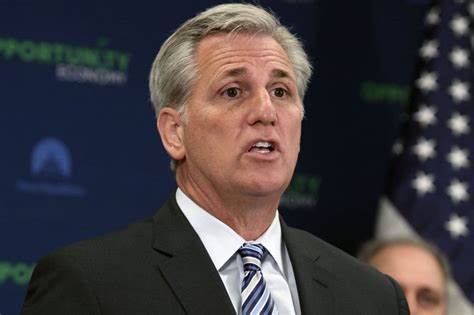 “I will promise you this, if we are fortunate enough to have the majority, Omar would not be serving on Foreign Affairs or anybody that has an antisemitic, anti-American view. That is not productive, and that is not right,” McCarthy said.

“Rep. Omar’s anti-Semitic & anti-American comments are abhorrent. Speaker Pelosi’s continued failure to address the issues in her caucus sends a message to the world that Democrats are tolerant of anti-Semitism and sympathizing with terrorists. It’s time for the Speaker to act,” he also tweeted.

Republicans and Democrats alike have condemned Omar for the comments she made during a video conference with Secretary of State Antony Blinken last week. Omar compared the U.S. and Israel to the terror group Hamas and the Taliban.

“We must have the same level of accountability and justice for all victims of crimes against humanity. We have seen unthinkable atrocities committed by the U.S., Hamas, Israel, Afghanistan, and the Taliban. I asked @SecBlinken where people are supposed to go for justice,” Omar said.

Omar described those who attack her statement as “Islamophobic” and “harassment.”

“It’s shameful for colleagues who call me when they need my support to now put out a statement asking for “clarification” and not just call. The islamophobic tropes in this statement are offensive. The constant harassment & silencing from the signers of this letter is unbearable,” she responded to her critics.

Amid the backlash, Omar was forced to release a statement seeking to “clarify” her comments.

“To be clear: the conversation was about accountability for specific incidents regarding those ICC cases, not a moral comparison between Hamas and the Taliban and the U.S. and Israel. I was in no way equating terrorist organizations with democratic countries with well-established judicial systems,” she said in her statement.

Pelosi later accepted Omar’s “clarification” and did not pursue any formal disciplinary actions against Omar.

“We did not rebuke her. We acknowledged that she made a clarification,” Pelosi said. “Congresswoman Omar is a valued member of our caucus. She asked her questions of the secretary of state. Nobody criticized those, about how people will be held accountable if we’re not going to the International Court of Justice. That was a very legitimate question. That was not of concern.”

In February, House Democrats voted to strip Republican Congresswoman Marjorie Taylor Greene of her committee roles after comments she made on social media before becoming a member of congress surfaced. Greene’s comments included various conspiracy theories regarding Sept. 11, 2001, as well as indicating support for violence against members of the Democratic leadership.