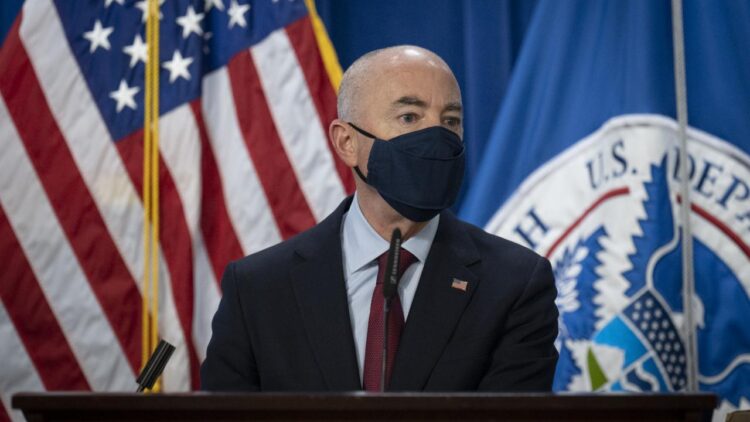 Leaked audio from Department of Homeland Security Secretary Alejandro Mayorkas’s meeting with Border Patrol agents in Texas paints a grim picture of the ongoing crisis at the southern border.

“A couple of days ago, I was down in Mexico, and I said look, you know, if, if our borders are the first line of defense, we’re going to lose, and this is unsustainable,” Mayorkas said Thursday, according to Fox News. “We can’t continue like this, our people in the field can’t continue, and our system isn’t built for it.”

RELATED: Illegal immigrants bussed by the hundreds to northern Texas due to overcrowding at border

During the meeting, Mayorkas told the agents that the situation on the border “cannot continue.” He added that the government’s system was not designed to handle the influx of migrants we’ve seen since President Biden took office. He acknowledged that the sector recently came close to “breaking.” “It’s our responsibility to make sure that that never happens again,” he said.

Mayorkas said the 210,000 migrants apprehended in July, a 13% increase from the previous month, is “one of the toughest challenges we face.”

Since taking office, the Biden administration has taken heavy criticism for its failure to handle the surge in illegal border crossings at the southern border. Vice President Kamala Harris, put in charge of the crisis by Biden, has been largely absent and has yet to produce a comprehensive strategy to deal with the crisis.

One agent who met with Mayorkas told him, “For those of us who have been around here long enough…we don’t need to reinvent the wheel…We’ve had this happen before. We know exactly how to shut it down. We need to make illegal entry illegal.”

During the meeting, Mayorkas told the agents that he had requested an additional 2,000 agents in the 2023 budget and claimed a new focus on Immigration and Customs Enforcement (ICE) to prevent no-shows at immigration courts. He also pledged that the Biden administration is fighting to “keep Title 42 in place.”

Tile 42, A Trump-era policy, is meant to help prevent the spread of COVID-19 into the United States by turning away almost all single adults and many families without being given a chance to seek asylum in the United States. Left-wing illegal immigration advocacy groups have pushed President Biden to cancel the policy, claiming it is inhumane.

Mayorkas also told the agents he is pushing for flights to deport illegal aliens into the interior of Mexico so that they can’t “turn around and give it another try.”

The Secretary’s comments appear to be a departure from the administration’s early approach, which saw almost all Trump-era immigration policies reversed and a 100-day moratorium on deportations issued by executive order.

Socialist Democrats like Rep. Alexandria Ocasio-Cortez (D-NY), Rep. Ilhan Omar (D-MN), Ayanna Pressley (D-MA), and Rep. Rashida Tlaib (D-MI) are most likely to push back against Mayorkas’s request for more border patrol agents. The so-called “Squad” has released statements calling ICE a “rogue agency” that acts to “inflict harm on our communities and have a pattern of behavior of abuse and mismanagement of funds.”