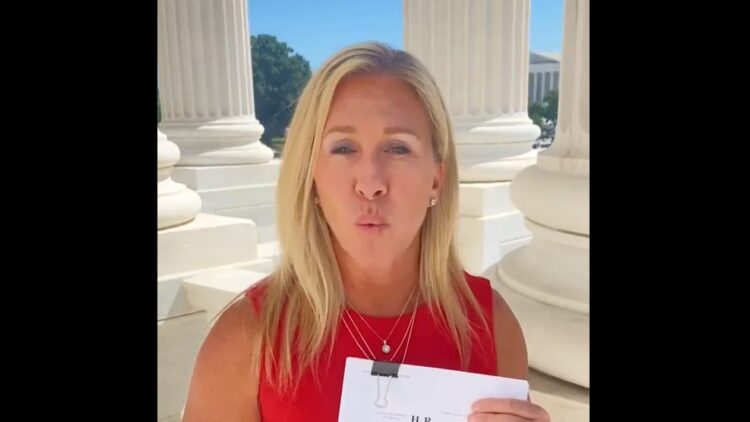 “Just moments ago I introduced legislation to ELIMINATE the ATF (H.R. 3960),” Greene said in a tweet announcing the legislation. “The ATF’s unconstitutional war on gun owners and our Second Amendment rights must end,” she added.

The proposed legislation would remove all ATF regulations put in place after August 1st, 2020. It would prohibit the agency from hiring and require a complete itemized list of all firearms and ammunition that has been confiscated which would then be auctioned off to the public. The proposal would also transfer the bureau’s regulatory power to the FBI.

The bill has been named after Brian A. Terry, the former marine and border patrol agent killed in the line of duty by criminals using illegal guns given to them by the ATF in a sting operation known as “Fast and Furious” under the Obama administration.

“I will not stand idly by while the ATF treads on the rights of my constituents and the American people,…Their unconstitutional reign against law-abiding gun owners must come to [an] end,” said Representative Matt Gaetz, who co-sponsored the bill.

In a move that angered many Second Amendment advocates, the agency announced a proposed rule change in how they define modified pistols, moving them into the “rifle” category. The change from pistol to “short-barreled rifle” would require gun owners to re-register their weapons under the National Firearms Act.

The NFA dictates that any short-barreled rifles, one with a barrel length shorter than 16 inches, must be registered with the ATF and the owner must pay an extra $200 tax. Gun manufacturers have been producing rifles with barrels shorter than 16 inches for years, however, they are equipped with pistol braces, which allows the shooter to stabilize their arm while firing, making the firearm a handgun, therefore avoiding the extra registration and the additional tax.

“The National Firearms Act imposes heightened regulations on short-barreled rifles because they are easily concealable, can cause great damage, and are more likely to be used to commit crimes, according to the DOJ.

Attorney General Merrick Garland issued another rule change to the ATF in May which sought to limit the ability for people to create “ghost guns,” which are homemade firearms that can be assembled using purchased or 3-D printed parts.

A group of 141 Republican lawmakers signed a letter to Garland expressing their opposition to the proposed rule changes on Monday.

“We are disturbed a government agency would issue guidance that would tax and take away the ability of tens of millions of Americans, including disabled veterans to enjoy constitutionally protected rights,” read the letter. It added, “The Second Amendment is the right that allows us to defend our other rights. If we are to uphold the Constitution, this right cannot be infringed.”