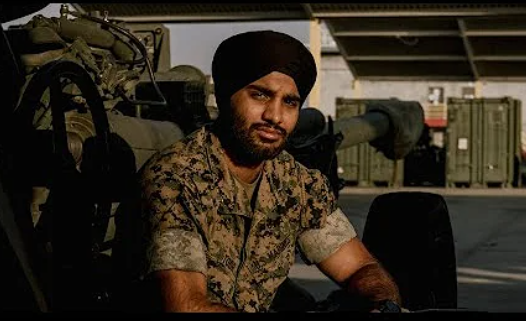 The U.S. military ruled that First Lieutenant Sukhbir Toor is now allowed to wear his Sikh turban and beard while in the Marine Corps, but with limitations – and Toor has vowed to sue.

He said that limitations on wearing his turban and beard meant he “would have to either sacrifice my career or my ability to practice my religion.”

Toor, the first Marine to be allowed to sport an unshaved beard or Sikh turban, is only allowed to do so while at a duty station, and not while in dress uniform, during deployment, or at military ceremonies. He plans to sue the military to strike down those limitations, as he is insistent on being able to dress and groom the way he wants to in combat and in his dress blues.

Toor is the first Sikh in the branch’s 246-year existence to be allowed to relax the military dress code to incorporate a turban and beard. “We’ve come a long way, but there is still more to go,” Toor told the New York Times.

“The Marine Corps needs to show it really means what it has been saying about strength in diversity — that it doesn’t matter what you look like, it just matters that you can do your job,” he continued.

Lieutenant Toor’s battalion commander is in charge of making sure Toor’s beard stays well-trimmed. In the event of deployment, he will be required to shave, which goes against the Sikh faith. Sikhs prohibit the shaving of all body hair.

“It is disappointing that the Marine Corps only wants to allow 1st Lt. Toor to practice his faith in ways and at times that are convenient to them; they would rather derail his promising career than acknowledge his right to practice Sikhi,” said Giselle Klapper, Sikh Coalition Senior Staff Attorney.

Part of the Sikh Coalition’s mission is to help Sikhs fight dress codes and obtain exemptions in various political, social, and economic situations. They are representing Toor and “considering final options before litigation” with respect to the limitations still placed on Lt. Toor.

“Toor’s case is the latest pivotal development in our 12-year campaign to combat employment discrimination by our nation’s largest employer, the Department of Defense,” continued Klapper.

The Army and Air Force have already made provisions (in 2017 and 2020, respectively) for Sikh soldiers and airmen to dress and groom according to their faith, and according to Klapper, the Marines are lagging behind.

“In 2016, we successfully took the U.S. Army to court over the right to maintain one’s articles of faith while serving in the military, and we’re prepared to do the same with the USMC now,” Klapper declared.

“No Sikh, in any workplace, should be forced to make a false choice between maintaining their articles of faith and excelling in their chosen profession.”

“While the Marine Corps has an obligation to support your ability to practice and observe the tenets of your faith, it may impose restrictions in support of compelling government interests,” wrote Lieutenant General David A. Ottignon in an initial response to the request in June.

“The Corps cannot experiment with the components of mission accomplishment – failure on the battlefield is not an acceptable risk.”