Mark McCloskey announces Senate bid: ‘When the mob comes to destroy our nation, I’ll defend it’ 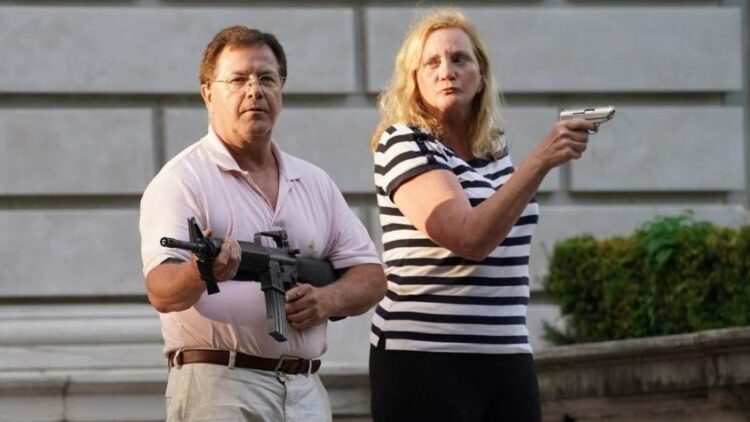 “An angry mob marched to destroy my home and kill my family, I took a stand to defend them,” McCloskey tweeted along with a video announcing his campaign.

His announcement comes after Senator Roy Blunt announced he is retiring after serving in the Senate since 2011. Blunt is 71 years old and previously served in the House for 14 years.

McCloskey’s Twitter bio states that he is a “Conservative Outsider running for Senate” and “the only outsider running in a field of politicians!” His official campaign website features four main policy positions on the home screen election integrity, pro-life, law & order, and the second amendment.

“We need to restore election integrity and faith in our elections immediately,” the website states. McCloskey proposes requiring all voters “show a photo ID at their polling place or send photocopies of their ID when submitting an absentee ballot.” He also takes a stand against abolishing the electoral college.

Along with taking a firm pro-life stance, McCloskey says he understands the incredible importance of the second amendment.

“When a mob came to destroy their home and hurt their family, the McCloskey’s were able to protect their home thanks to the right to bear arms. The McCloskey’s story has empowered thousands of new gun owners across the country to purchase a firearm and learn how to defend themselves. Thousands of women have written to Patty to express their gratitude for taking a stand,” the website says.

McCloskey and his wife first made headlines last June when they were filmed holding firearms standing in front of their home after Black Lives Matter protestors stormed their private gated entrance. Demonstrators were marching to the home of then-Mayor Lyda Krewson on June 28 to demand she resign amid nationwide protests that followed George Floyd’s death.

“I turned to my wife and I said, ‘Oh my God, we’re absolutely alone. There is nobody here to protect us.'”

That’s when the couple retrieved their guns and stood on their front porch, attempting to deter the protestors away from their home.

“When I saw that mob coming through the gate with their rage and their anger, I thought that we would be overrun in a second,” he said. “By the time I was out there with my rifle, the people were 20 or 30 feet from my front wall… I was literally afraid that within seconds they would surmount the wall and come into the house, kill us, burn the house down and everything that I had worked for and struggled for the last 32 years.”

He added that the race of the protestors didn’t matter to him at the time and that his only motivation was to defend his home and family.

“To call us racist is ridiculous, and it had nothing to do with race. I wasn’t worried what the race was of the mob that came through my gate, I was worried that I was going to be killed. I didn’t care what race they were.”