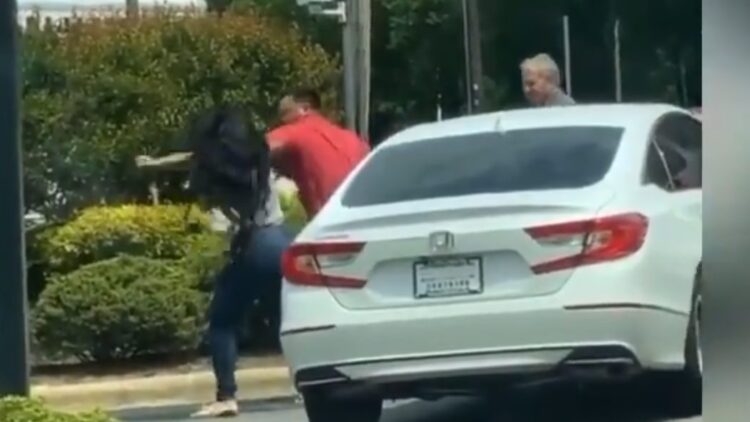 A man and a woman were seen fist fighting and spitting on each other after the woman tried cutting in line at a gas station in North Carolina.

A woman driver hit a male driver’s vehicle while trying to cut in front of him in a long line at the gas station. The woman exits her vehicle, approaches the man while yelling and holding her cell phone and spits on the man through his open car window. The man exits his vehicle, approaches the woman and then spits in her face before the two begin to throw punches at one another, video footage shows.

Police say the two argued over spots in the line before the physical altercation occurred. During the fight, the man is seen kicking the woman’s cell phone into the street.

The incident highlights a growing concern over gas shortages affecting the East Coast in the aftermath of the Colonial Pipeline hack, which shut down the pipeline Friday. The Colonial Pipeline runs from Houston Texas, up the coast to Linden New Jersey, and supplies about 45% of the fuel used along the Eastern Seaboard.

The hackers who shut down the pipeline released a statement saying they didn’t intend to cause problems for society.

“The agencies across the government have acted quickly to mitigate any impact on our fuel supply,” President Biden said Monday. “We’re prepared to take additional steps depending on how quickly the company is able to bring its pipeline back up to capacity.”