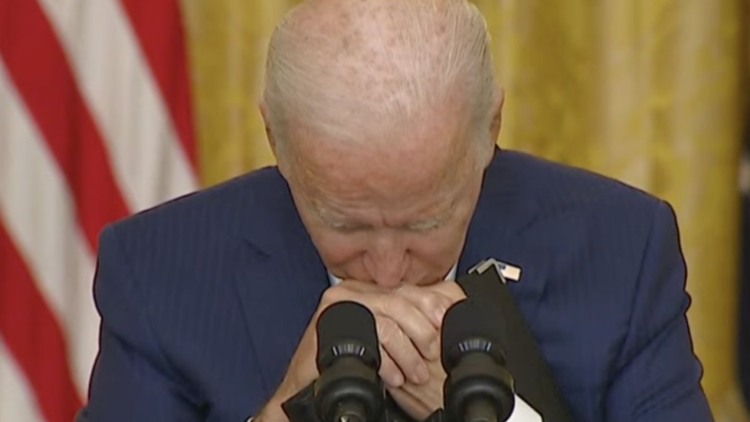 A new Rasmussen Reports poll found that a majority of voters now believe President Joe Biden should resign after 13 U.S. service members were killed during his botched withdrawal from Afghanistan.

The poll found that 52% of voters say President Joe Biden should “resign because of the way the U.S. withdrawal from Afghanistan was handled.” While 39% said they disagree and 9% were unsure.

An even larger majority of voters, 60%, agreed that Congress should impeach him if he does not resign. Echoing Senator Lindsey Graham’s statement that Biden deserves to be impeached.

“I think Joe Biden deserves to be impeached because he’s abandoned thousands of Afghans who fought with us, and he’s going to abandon some American citizens because he capitulated to the Taliban to a 31 August deadline,” Graham said Aug. 24.

Just 37% said they disagreed with Graham’s statement regarding impeachment.

The poll asked voters how they felt about Vice President Kamala Harris becoming President should Biden resign or be impeached. Only 38% said Harris is qualified to assume the duties of being president. A large majority, 58%, view Harris as unqualified to be president, including 47% who said she is “not at all qualified.”

“A desire to get Biden out of the White House does not translate to confidence in his vice president’s qualification to replace him,” Rasmussen Reports wrote in summary. “Among voters who believe Biden should resign because of the way the U.S. withdrawal from Afghanistan was handled, only 13% think that Harris is at least somewhat qualified to assume the duties of being president.

“Conversely, among voters who don’t think Biden should resign, 74% say Harris is at least somewhat qualified to become president,” they continued.

Among women, 49% agreed with Graham’s impeachment statement. Women are more likely than men, 43%, to say that Biden deserves to be impeached.

Rasmussen Reports surveyed 1,000 likely U.S. voters Aug. 30-31, along with fieldwork by Pulse Opinion Research. The poll has a margin of error of plus or minus 3 percentage points.