Kristi Noem attacks other GOP Gov’s over COVID response: ‘Pretending they didn’t shut down their beaches’ 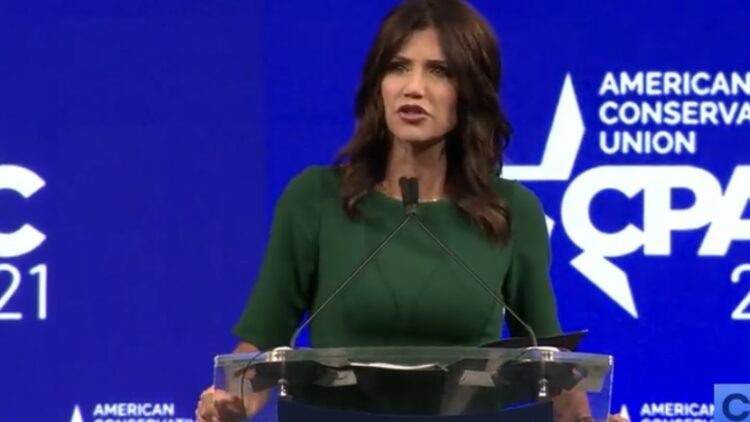 Governor Kristi Noem (R-SD) accused ‘some’ Republican governors of “rewriting history” on how they dealt with COVID-19.

Noem has been considered a possible presidential contender in 2024 and has used her hands-off approach to dealing with the COVID-19 pandemic to separate herself from her rivals. Other high profile Republican governors, such as Ron DeSantis of Florida, also refused to go along with harsh lockdowns implemented by Democratic Governors like Andrew Cuomo (D-NY) and Gavin Newsom (D-CA).

Democrats and the media hammered both Noem and DeSantis for keeping industries open in their states and for their reluctance to implement stay-at-home orders, earning them both widespread praise among the base of the Republican Party. On June 6, DeSantis attended a country music festival in Panama City Beach, Florida, and was met with huge applause after saying that “Florida chose freedom over Fauci-ism.”

“Now I’m not picking fights with Republican governors,” Noem continued at CPAC. “All I’m saying is that we need leaders with grit, that their first instinct is to make the right decision, that they don’t backtrack and then try to fool you into the fact that they never made the wrong decision.”

Noem recently came under fire from Republicans when she caved to corporate pressure and vetoed a bill to ban biological males from participating in girl’s sports. Noem had originally promised to sign the bill but backtracked after the NCAA threatened to pull their business out of her state. Following pushback, Noem said she was a victim of ‘conservative cancel culture.’ On the other hand, DeSantis signed the same proposal into law and said that corporate pressure ‘strengthened’ his resolve to sign the bill. Noem has also been targeted online after claiming that she never shut down South Dakota or mandated masks.

‘Be it enacted by the legislature of the state of South Dakota: The Secretary of Health may order the closure of…a business, park, school, or other location that promotes public gathering,” South Dakota Legislature House Bill 1297 reads. “If reasonably necessary to slow or prevent the spread of communicable diseases during a public health emergency declared, or an emergency declared by the Governor.’

On April 6, 2020, Noem issued two executive orders relating to COVID-19. Some of the provisions included:

Noem’s spokesperson, Ian Fury, recently claimed in a press conference that she was not referring to any specific Republican governor and was rather ‘highlighting the need for strong leaders with the instinct to defend freedom.’