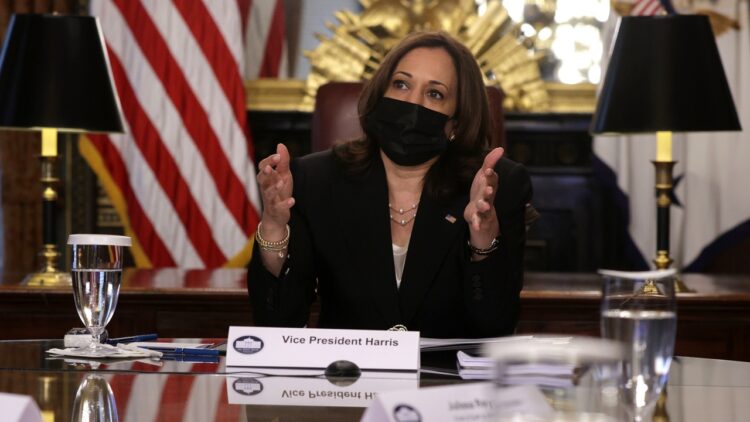 WASHINGTON, DC – APRIL 14: U.S. Vice President Kamala Harris participates in a virtual roundtable with experts on the southern border crisis at the Vice President’s Ceremonial Office at Eisenhower Executive Office Building of the White House on April 14, 2021 in Washington, DC. Vice President Harris convened the meeting to discuss assessments and recommendations for the immigration crisis in the region. (Photo by Alex Wong/Getty Images)

Pro-Trump protesters unexpectedly greeted Vice President Kamala Harris during her trip to Guatemala with taunting signs and messages urging her to “go home” and “mind her own business.”

Harris is traveling Monday and Tuesday through Guatemala to examine the root causes of the migrant crisis at the U.S. Southern Border. Upon arriving, the vice president’s motorcade passed a group Trump supporters on her way to a bilateral meeting with Guatemalan President Alejandro Giammettei.

Another sign that appears to have been hoisted by activists onto a tall billboard along the roadway says, “Kamala Stop Funding Criminals #FueraDeGuatemala.”

Giammatei says he and Harris “are not on the same side of the coin” on migration. “We asked the United States government to send more of a clear message to prevent more people from leaving,” he said. “The message changed too: ‘We’re going to reunite families, we’re going to reunite children,’” he added. “The very next day, the coyotes were here organizing groups of children to take them to the United States.”

President Biden made Vice President Kamala Harris the border czar in March, meanwhile she has not made a single trip to the border to examine the crisis first hand. Harris’ trip to Guatemala is her first foreign trip as Vice President.

Biden’s critics blame his reversal of several Trump-era policies for the spike in illegal border crossings since he took office. Biden reversed Trump’s “remain in Mexico” policy which barred asylum seeker’s entry into the United States until their court hearing to determine whether it will be granted or not.

Biden also halted the construction of President Trump’s US-Mexico border wall shortly after taking office. Biden’s immigration policies include urging Congress to pass a pathway to citizenship for most illegal immigrants currently in the U.S.