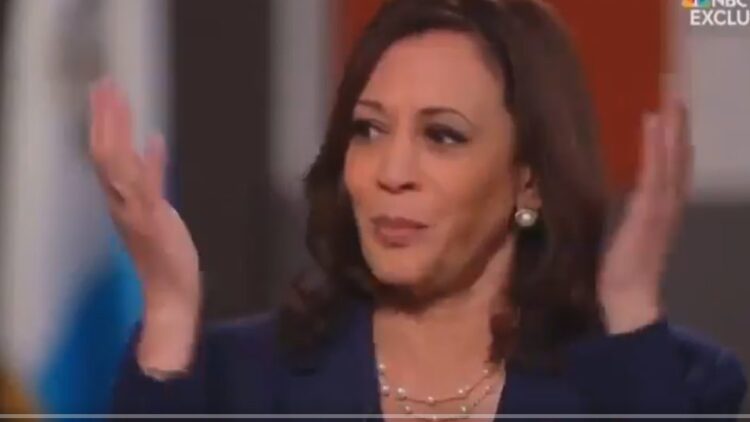 An interview between NBC anchor Lester Holt and Vice President Kamala Harris became tense after Holt pressed Harris on her current refusal to visit the U.S. southern border amid the migrant crisis.

When pressed by Holt on why she wasn’t visiting the border, Harris responded by jokingly saying that she hasn’t been to Europe either. “I don’t understand the point that you’re making,” she added.

Holt started off by pointing out that Harris has not visited the border amid backlash from Republicans and even some Democrats from cities along the border, including Democratic Texas Representative Henry Cuellar.

Holt pressed Harris a second time, reminding her that she has not been to the border, which is what her critics are talking about.

“I, and I haven’t been to Europe. And I mean, I don’t, I don’t understand the point that you’re making,” Harris said, adding “I’m not discounting the importance of the border.”

“Listen, I care about what’s happening at the border,” Harris said, noting that she is “in Guatemala because my focus is dealing with the root causes of migration.”

“There may be some who think that that is not important, but it is my firm belief that if we care about what’s happening at the border, we better care about the root causes and address them,” she added. “And so that’s what I’m doing.”

Reactions to Harris’ comments were swift across Twitter with many pointing out the insensitive nature of her attitude toward the crisis on the border.

One user saying “Why can’t she speak one sentence without laughing?”

Madison Gilbert said: “I would be willing to bet that Kamala Harris’ laugh haunts people in their sleep.”

Nick Adams said: “When Kamala Harris was asked by fake news Lester Holt why she hasn’t been to the border she laughed it off and said she also hasn’t been to Europe. What an embarrassment to the country that our Vice President is a FRAUD.”

Another user said: “Kamala Harris is showing us why people who get less than 1% in a presidential primary shouldn’t be in charge of anything.”

“That nervous cackle is so revealing,” wrote another user.

In March, President Joe Biden appointed Harris as his administration’s border czar. Tasked with formulating the government’s response to the situation at the U.S. southern border. Since then, she has faced criticism from both sides of the aisle for not visiting the border herself.

The tense interview comes as Harris’ trip to Guatemala was met with pro-Trump protestors shouting and holding signs that read “Kamala, Trump Won,” and “Go Home” upon arriving.