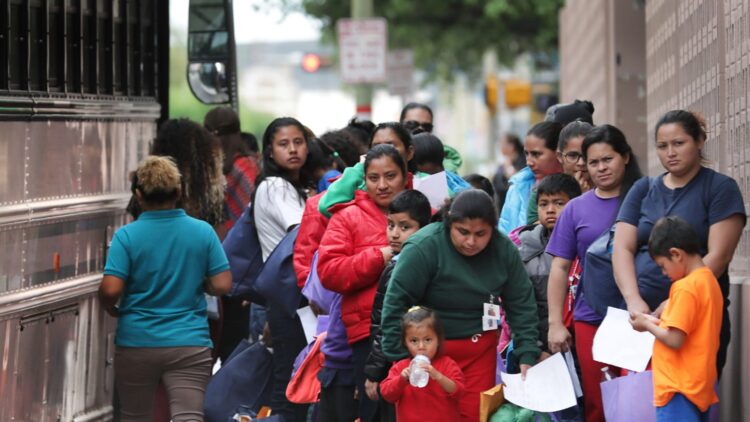 Busses full of illegal immigrants are being shipped from Laredo and Del Rio to Dallasamid overcrowding at border facilities.

Laredo Mayor Pete Saenz said his border city is overwhelmed with immigrants transferred there by U.S. Border Patrol in the Rio Grande Valley. Noraida Negron, spokeswoman for the Mayor, confirmed that the city of Laredo chartered buses to send immigrants to Dallas, Austin and Houston, sending over 800 into the northern part of the state.

Negron also confirmed that the immigrants being sent from Laredo have been tested for COVID-19. The Border Patrol does not test migrants at its facilities before they are released to nonprofits for eventual transfer to the U.S. interior, where they typically await dates in immigration court.

Almas Muscatwalla, Executive Director of Faith Forward Dallas, one of the religious groups helping to usher illegal immigrants across the border, said it was unclear whether the immigrants from Del Rio had been tested. However, she said all immigrants are provided with masks and hand sanitizer.

After arriving in Dallas the illegal immigrants are then given food, hotel rooms, transportation to airports and bus stations, and medical care by non-profits.

“This is like survival of the fittest,” said Muscatwalla. But she added, “I’d rather have this situation than not have anyone helping … I want to provide the best hospitality and welcome to these people.”

Catholic Charities, another religious group that is assisting the illegal aliens to cross the border, said they cared for 40-50 immigrant families a day over the weekend in Dallas. Dallas Police Officers were tasked with purchasing fresh diapers for the illegal alien children.

Christina da Silva, officer for the Welcoming Communities and Immigrant Affairs office for the city of Dallas said the illegal aliens did not even know what city they were in and some of the children lacked shoes.

“It’s such a vulnerable situation for them,” said da Silva. “Dallas is a welcoming city. We want to respect their dignity as a human.”

Laredo Mayor Saenz was invited by Department of Homeland Security Secretary Alejandro Mayorokas to visit the Rio Grande Valley on Thursday. The DHS chief warned earlier that migration will soon reach levels not seen in two decades under the Biden Administration. Mayorkas blamed issues like natural disasters and poverty for the increase in illegal border crossings.

Customs and Border Protection encountered more than 200,000 individuals at the southern border in July, reaching a number not seen in two decades, according to preliminary figures referenced by a senior Department of Homeland Security official.