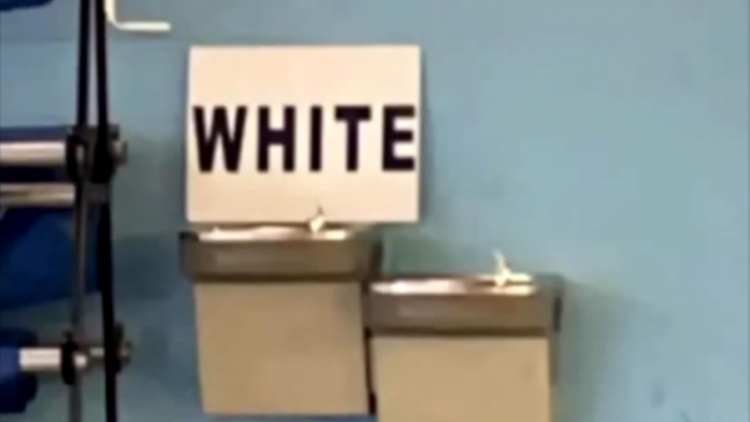 A North Carolina high school is apologizing after a sign with the word “white” was placed on top of a water fountain.

“I can only imagine how many people saw it because all of these kids are so interconnected on social media, especially on Snapchat in that age group, so everybody in the school knows about what’s going on,” a former student, who preferred to stay anonymous, said.

Students took pictures of the sign and shared them on social media, including the popular photo-sharing app, Snapchat.

“I was really upset, especially knowing that I graduated there too a couple of years ago,” the former student added. “I know that my brother has told me that they are getting calls from parents already that are angry about what’s going on.”

Dylan Stamey, the school’s principal, issued a letter to parents apologizing for the sign after the image went viral.

“During practice, a cheer sign was left just outside the gym on the floor, and it was picked up and placed on a water fountain,” Stamey said. “We have investigated this matter and concluded that the placement was not intentional.”

The principal’s message added that if anyone was offended, the school apologizes.

The Independent Chronicle reached out to Piedmont High School for comment but did not immediately receive a response.

Last month, a school in California made headlines after students created an Instagram account for a black baby doll they named “Shaniqua.”

“They drew crosses on the eyes, they put a bandana around her neck and was spinning her around. And they put an ankle monitor, and it’s just really disgusting,” said Julian Henderson, a Salinas High School senior.

The doll was seen at a football event where cheerleaders took photos with it, posting the images to the doll’s Instagram page. The Instagram page for the doll listed its pronouns as Ze/Zir. The doll’s profile is now listed as private. The page had 70 followers and 30 posts before being taken down.