Hamas condemns Ilhan Omar for comparing them to U.S. and Israel 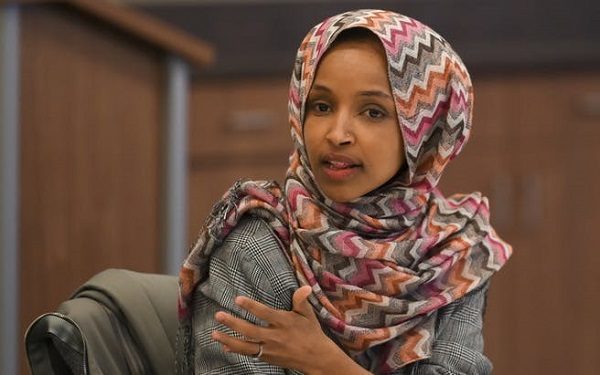 Hamas issued a statement praising Rep. Ilhan Omar for “defending justice,” but also criticized her for comparing the terror organization to the United States and Israel.

“She equated the resistance of the Palestinian people on the one hand, and the crimes of the Israeli occupation in Palestine and the American aggression in Afghanistan on the other,” wrote Dr. Basem Naim from Hamas‘ international relations office.

“We appreciate Mrs. Ilhan Omar’s stances in defending justice and the rights of the oppressed around the world, foremost of which are the just rights of our Palestinian people, but we deplore this unfair combination,” the statement said.

The statement was in reaction to comments Omar made during a video conference with Secretary of State Antony Blinken.

“We must have the same level of accountability and justice for all victims of crimes against humanity. We have seen unthinkable atrocities committed by the U.S., Hamas, Israel, Afghanistan, and the Taliban. I asked [Secretary of State Antony Blinken] where people are supposed to go for justice,” Omar tweeted Monday.

Members of both political parties also criticized Omar over her comments, including a statement from 12 Jewish lawmakers, headed by New York Democrat Jerry Nadler.

“Equating the United States and Israel to Hamas and the Taliban is as offensive as it is misguided,” wrote the group, in a statement.

“Congresswoman Ilhan Omar has made a congressional career out of the following: Fueling anti-Semitic violence against Jewish communities by perpetuating false stereotypes and anti-Semitic tropes; denigrating strategic allies of the United States; accusing members of Congress of unconstitutionally pleading allegiance to a foreign sovereign because of their support of the U.S.-Israel partnership; whitewashing the September 11 terrorist attacks that resulted in the death of over 3,000 innocent Americans, and drawing [an] equivalence between the United States and criminal organizations such as Hamas and the Taliban—both of which have been deemed by the Department of State as terrorist organizations,” they wrote.

Omar clarified her comments in a statement, saying, “On Monday, I asked Secretary of State Antony Blinken about an ongoing International Criminal Court investigations. … To be clear: the conversation was about accountability for specific incidents regarding those ICC cases, not a moral comparison between Hamas and the Taliban and the U.S. and Israel.”

“In no way equating terrorist organizations with democratic countries with well-established judicial systems,” she added.

“Legitimate criticism of the policies of both the United States and Israel is protected by the values of free speech and democratic debate… But drawing false equivalencies between democracies like the U.S. and Israel and groups that engage in terrorism like Hamas and the Taliban foments prejudice and undermines progress toward a future of peace and security for all,” Pelosi and other Democratic leaders said. “We welcome the clarification by Congresswoman Omar that there is no moral equivalency between the U.S. and Israel and Hamas and the Taliban.”