Gunman beaten to death with brick after deadly shooting in Texas 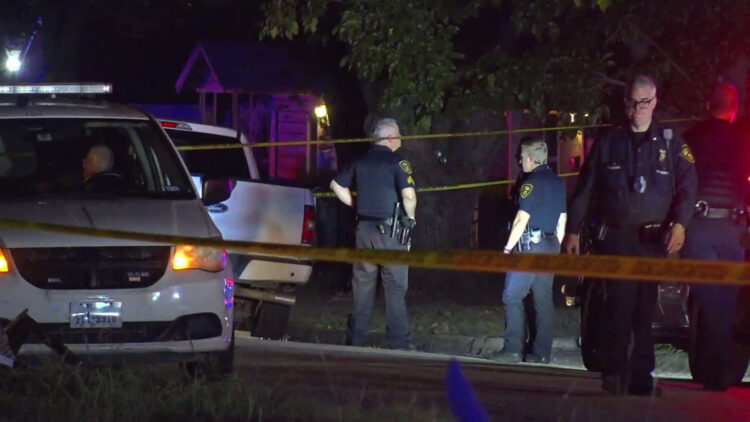 A man who shot a person during an argument on Monday in Fort Worth, Texas, was chased down and beaten to death with a brick.

The violence began during a small gathering in a backyard of a Fort Worth home when a man became upset with the other attendees. Police say the man left the party and returned shortly thereafter with a gun and opened fire. When officers arrived, they found two people dead and several wounded from gunshots.

A group of party-goers was able to chase the gunman away by hurling concrete bricks at him. During the chase, the gunman continued to fire shots and was eventually stopped after being “struck multiple times with at least one landscaping brick,” according to police.

Authorities say the gunman and one other person who had been shot were pronounced dead at the scene. Three others were hospitalized with non-life-threatening injuries.

“A handgun believed to be the one used by the shooter has been recovered by crime scene personnel. Homicide detectives are continuing to interview all involved attendees,” read part of a statement released by the Fort Worth Police Department.

The tragic shooting occurs less than a month after Fort Worth Police responded to a road rage incident that left one man dead after pointing a gun at another armed man whose children were in the car with him.

“I saw a motorcycle. A green motorcycle speed pass me up between me and the next car. Maybe 10-15 seconds later, I hear four gunshots,” witness Isel Valenzuela recalled. “I look over and I see him laying there. With blood all on his chest and his stomach.”

Police say the motorcyclist, 19-year-old JaDerek Gray, was swerving in and out of lanes and driving in between multiple vehicles, which is illegal in Texas. His aggressive driving resulted in him nearly hitting an SUV before pulling ahead of it and stopping in the middle of the highway.

Gray parked his motorcycle in the middle of traffic, walked up to the SUV, pulled out a gun, and pointed it at the driver. The driver of the SUV asked Gray to drop his weapon. Gray refused and continued to approach the SUV. The driver then pulled out his own weapon and fired at Gray, striking him multiple times and killing him.

Earlier this month a Portland man named John Dickson knocked out an active shooter at an apartment complex with a stick and hogtied him until police arrived.

After nearly 30 rounds were shot into the apartment complex, Dickson sneaked up on the gunman and bashed him with a stick. Dickson wrestled the gun away from the shooter and punched him until he was knocked unconscious.