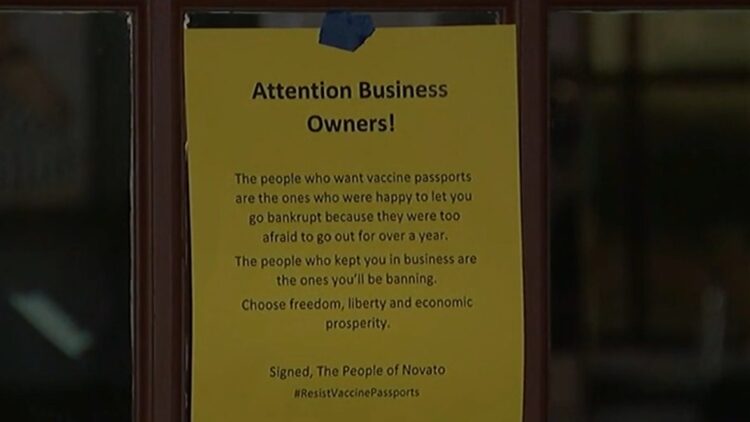 A group of anti-vaccine mandate protestors in Novato, California, issued a warning to local businesses not to impose vaccine mandates on customers.

“I believe in freedom and forcing people to take a vaccine is against freedom,” a protestor named Michael told local media. “We are fighting for what we believe is right. And if you don’t give the government pushback, then they will take even more.”

The activists posted large yellow flyers on the doors and windows of businesses in their neighborhood. Part of the poster reads: “The people who kept you in business are the ones you’ll be banning.”

Protesters say vaccine and mask mandates infringe on their freedoms.

“We’re people. We’re customers. We kept you in business through this last year when other people were being scaredy cats staying at home and you need to be vaccinated to come in your store?” Susan Balm, who also took part in the protest, said.

The protestors warned businesses they will boycott their stores if they implement vaccine mandates. Many of the protestors said their hesitancy to get the vaccine is based on possible side effects or long-term effects that aren’t known yet.

Some residents disagree with the protesters’ stance.

“I think the idea is that we have to be as safe as possible,” said Randy Couvillon. “Nobody knows what it’s like even a year and a half later to continue with this pandemic. I respect that they are voicing their opinions but it’s a complication we don’t need.”

RELATED: Man hospitalized with COVID says he’d rather be sick than get the vaccine

The California Department of Public Health now recommends wearing a mask indoors, regardless of vaccination status, because of the rise of the delta variant.