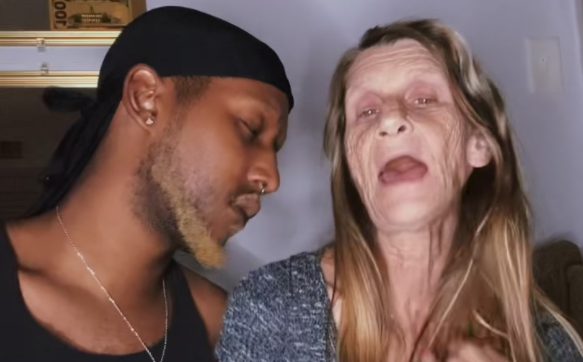 A 61-year-old grandmother recently got engaged to a 24-year-old man she has known for the last 9 years.

“Even though it is a[sic] age gap we never think of it because Cheryl has a very young spirit, soul and heart,” Quran McCain, 24, said of his fiancee, Cheryl McGregor, 61.

Although they met when he was only 15 years old, McCain says his romantic interest in McGregor began nearly a year ago. Despite being younger than one of her own children, they both say their sex life is fantastic and even started an Onlyfans account to share their lovemaking.

McGregor, who has 17 grandchildren, said she gets upset by the hateful comments posted online about her relationship with McCain but does her best to ignore them.

McCain says he thinks the biggest misconception about his relationship with McGregor is “that I’m using her or waiting to be put in the will.”

“It’s different, it’s amazing, he’s very compassionate to me, and I think it’s because he’s a younger man,” McGregor said. “I couldn’t have that with anybody else, he’s very emotional, and that’s something I’ve never dealt with – they were all angry, and he’s emotional in a good way because he shows me he really cares,” she added.

The two met while working at a Dairy Queen restaurant together in 2012. McGregor’s son was his manager, and she would check on him regularly or get meals. McCain eventually left the Dairy Queen, and the two lost contact.

“We didn’t think much of each other – she drove a baby blue Carrera, and that’s the only reason I noticed her!” he said

In November 2020, the two reconnected when McCain visited a convenience store for which McGregor was a cashier.

“I used to see her every day, she would always be so happy, but today she was sad, and I asked her what was wrong, and she was crying,” McCain said.

She was upset after posting a TikTok video of her dancing which received hate comments, and he helped comfort her during that difficult time. After meeting, they stayed in touch and eventually began dating.

“We connected on a spiritual level,” McCain said. “No matter the situation, we just have a certain vibe that connects anytime we are around each other.”

“We went on a date, and I told her feel like I’m catching feelings,” he said. “She said she had too, but just didn’t think we should cross that line because friends don’t always stay friends when they date.”

Despite trying to keep their relationship strictly platonic, they began dating and formed an intimate relationship. Since being together, they’ve created various TikTok dance videos that have gone viral, with over 1.3 million likes.

McCain’s TikTok account, @ttvleolove-3, appears to have been taken down and replaced with a backup, where the couple regularly posts videos of themselves. “Together, we have over 700,000 accounts blocked just from the hate,” McCain said.

“There’s just something between him and I that I never thought we would be together like this. He’s just an amazing person,” McGregor said. “There’s a different type of chemistry with him even though he’s younger. We have a lot of chemistry because of the things we’ve been through, and it pulls us closer together.”

Regarding the couple’s sex life, they both described it as “amazing.”

“It gets better and better every time,” McCain said. Adding, “It’s pretty normal, it’s not out of the ordinary, but to me, it’s amazing. She knows what she’s doing – that’s the best part!”

Last week the couple set up an Onlyfans account to showcase their love for each other and take advantage of the many requests they get to see McGregor’s feet. “People really love her feet, and it’s so weird!” McCain said.

“There’s a lot of creeps,” McGregor added. “I guess some things are better left not said!”