Governor pardons couple who defended their home from BLM protesters 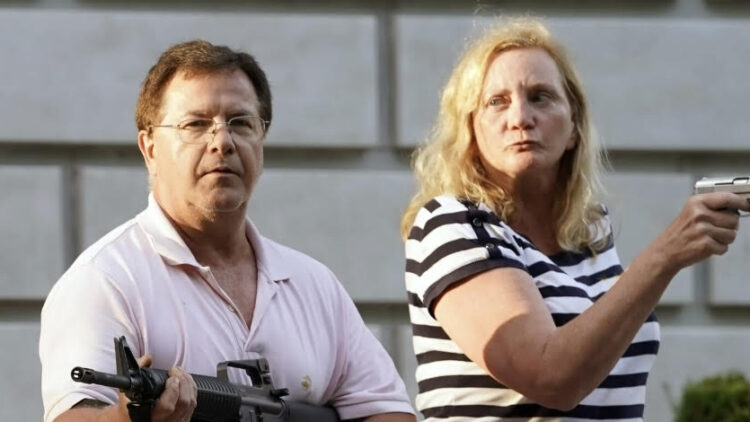 Missouri’s governor issued a pardon on Friday to Mark and Patricia McCloskey, the St. Louis couple who drew national attention last year after they pointed guns at BLM protestors who had surrounded their property.

“I’d do it again. Any time the mob approaches me, I’ll do what I can to put them in imminent threat of physical injury because that’s what kept them from destroying my house and my family,” Mark said outside of the St. Louis courthouse last year. Both pleaded guilty to misdemeanor assault and harassment charges. They were also forced to pay a $2,750 fine and surrender their firearms.

In June 2020, Mark and Patricia walked out of their home and were confronted by hundreds of BLM protestors. The McCloskeys alleged that the protestors broke down their home’s front gate and began to stream into their yard. Mark says he tried to tell them to leave, repeating that they were trespassing on private property.

“As soon as I said the words ‘private property,’ it seemed to enrage them,” Mark said. “I ran in, got my rifle. I started standing on the wing of the patio, saying, ‘Private property! Get out! Get out of here!’ They kept pouring in. That seemed to make them want to come forward.”

St. Louis Circuit Court Attorney Kimberly M. Gardner, a Democrat, initially charged the McCloskeys with felony gun crimes. However, her entire office was quickly removed from the case after she used the McCloskeys’ name in campaign fundraising emails. In the emails, she alleged that Republican Governor Mike Parson was “fighting for the two who pointed guns at citizens during the Black Lives Matter protests.”

Parson has received backlash online following his announcement, though some say he made the right decision.

“BREAKING: The Missouri Governor has pardoned the St. Louis couple [sic] the McCloskey’s [sic] in over the Stalin-like DA who tried to indict them for defending their homes from BLM-trespassers last year….” Matt Couch wrote in a tweet that has garnered 9,000 ‘likes.’

“BREAKING: Missouri governor pardons Mark and Patricia McCloskey, who protected themselves from radical BLM activists invading their property,” a user named Cassandra wrote in a tweet.

“Are you f***ing kidding me,” Amy Lynn wrote in a tweet that garnered over 8,000 ‘likes.’ “Missouri Gov pardoned the McCloskey couple in St. Louis who aimed guns and threatened BLM protestors! What a f***ing joke!”

“Just a reminder that [Congresswoman] Cori Bush [D-MO] had an AR-15 pointed at her by Mark and Patricia McCloskey last summer,” Jake Lobin wrote in a tweet. “And on the SAME DAY that Cori Bush’s activism helped save millions from eviction, Missouri Gov. Mike Parson pardoned the McCloskeys for waving guns at her. Just wow.” Bush also released a statement upon hearing of the pardon.

“Unbelievable. There are pardons that we have been asking for, pardons that actually should happen in Missouri, and that was not one. Mark McCloskey is an absolute liar. He has spat on my name, and because of that, his day will come,” Bush said.

McCloskey, who was a Democrat before the incident, announced his bid for U.S. Senate back in May. McCloskey is running as a Republican and credits the nationwide protests last year for his decision to seek public office. “God came knocking on my door last summer disguised as an angry mob,” he said.