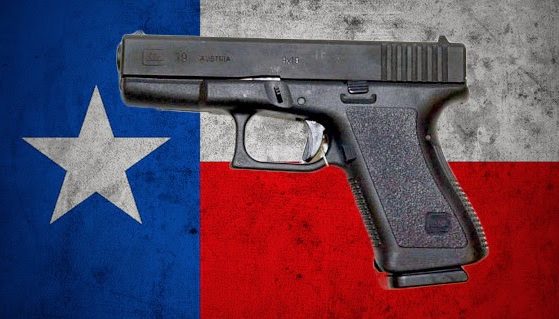 Texas Governor Greg Abbott said he would sign legislation allowing Texans to carry handguns in public without a license.

“I support it, and I believe it should reach my desk, and we should have ‘constitutional carry’ in Texas,” Abbott said. The legislation is working its way through the Texas state senate and would require passage in the House before reaching Abbott’s desk for signature.

“Once the Senate passes it out, the House and Senate will convene and work out any differences and get it to my desk,” Abbott said on Tuesday. “And I’ll be signing it,… This is something that 20 other states have adopted and it’s time for Texas to adopt it, too,” he added.

“If we have the votes to pass a permitless carry bill off the Senate floor, I will move it,” Patrick said in a statement. “At this point, we don’t have the votes on the floor to pass it. I plan to meet with law enforcement who oppose permitless carry and with the [National Rifle Association] and [Gun Owners of America] who support it to see if we can find a path that a majority of senators will vote to pass.”

Texas’ state Senate is a 31-member chamber. All proposed bills must reach 18 votes before being brought to the floor for consideration. Currently, Republicans hold 18 of 31 state Senate seats, requiring that the permitless-carry bill gains support from every single GOP state Senator.

GOP State Senator Kel Seliger could be the deciding vote on whether the legislation makes it to the Governors desk for signature. Seliger told local media that he might not be immediately supportive of the proposal. Saying that his office was still researching the issue, and he tends to support “just about all” bills related to gun rights, but the “system that we have now works.” He said it was too early to say whether he would block the bill from coming to the floor or vote against it if it made it to the floor.

House Bill 1927 would eliminate the requirement for Texas residents to get a license to carry handguns if they are not already prohibited by state or federal law from possessing a firearm. The House passed the legislation on April 16 in an 87-58 vote that included seven Democrats supporting it.

Texas GOP Chairman Allen West says it’s past time for the permitless-carry law to pass and placed blame on the Lt. Governor for inaction on moving the legislation forward in the Senate. In a radio interview last week, West said that it has “been the lieutenant governor that has not wanted [permitless carry] to see the light of day.”

“Constitutional carry” is one of the state party’s eight legislative priorities, and it would be “not acceptable” if the Senate watered down the House proposal. The GOP activists who select the party’s priorities “applaud … what happened in the House, and they expect the same thing out of the Senate,” West added.