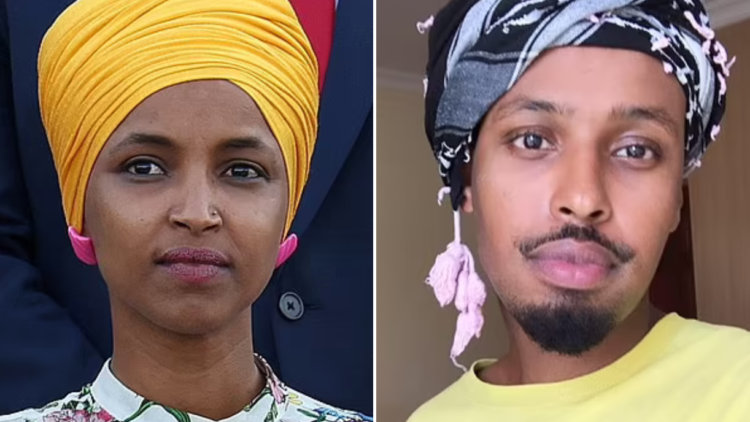 A now-disgraced Republican strategist was arrested for child sex trafficking hours after claiming Rep. Ilhan Omar (D-MN) married her brother and releasing what he calls evidence of the alleged fraudulent marriage.

The now-deleted tweet from Anton Lazzaro, a Minnesota-based GOP strategist, showed results of an Endeavor DNA Laboratories test showing a 99.999998% chance that Omar and her second husband Ahmed Elmi are siblings. Hours after posting the results Lazzaro was arrested and charged with child sex trafficking.

“After two years, we now have DNA EVIDENCE that @IlhanMN DID marry her Brother. She has committed #MarriageFraud #ImmigrationFraud and #FelonyConspiracy. See the EVIDENCE HERE…Enough is enough. RT to spread the truth,” Lazzaro tweeted, along with an image of the DNA test and a link to a site created by him.

Lazzaro, 30, is accused of conspiring with others to recruit and solicit six minors to engage in commercial sex acts, according to the U.S. Attorney’s Office.

“If the allegations against Mr. Anton Lazzaro are true, this is an abhorrent act that we condemn in the highest possible terms,” said Republican Party of Minnesota Chairwoman Jennifer Carnahan. “The Republican Party of Minnesota will be donating the contributions that Mr. Lazzaro has given our organization to charity. Sex trafficking is a heinous act that preys on victims of all ages, races, and backgrounds, and warrants severe punishment by our judicial system. A full investigation is necessary to ensure due process is provided to all parties involved.”

Lazzaro’s claims of evidence against Rep. Omar are listed on a website founded by him and paid for by his Big Tent Republican’s PAC.

The report does not name Omar or her second husband by name but rather “Sibling 1” and “Sibling 2.”

Lazzaro’s website says that the group garnered a DNA sample from Elmi’s straw in Leicester, England as part of a two-year investigation. He has recently been living in both Kenya and on the east African island of Zanzibar.

The DNA sample from Omar reportedly came from a cigarette butt smoked by the Congresswoman. She isn’t known to be a smoker but images of her smoking outside her Washington, D.C. home have been widely circulated online.

The Independent Chronicle contacted Endeavor for comment regarding the test but did not immediately receive a response.

“As part of our investigation, Rep. Ilhan Omar’s personal trash items containing saliva were legally obtained by Toltec Investigations (Lic. 45-3659615) outside her Washington, DC residence on numerous occasions to be tested by Endeavor DNA Laboratories (MoJ & ISO 17025 Accredited). Her former husband Mr. Elmi was located in Leicester, UK and a discarded items of his including cigarette butts were also obtained by our UK investigation team on multiple occasions,” the website states.

“After professional lab analysis of these samples, a full DNA profile was established after several collections of waste on public property including CocaCola cans, hair, and cigarette butts littered from her personal vehicle below while conducting surveillance operations over several months,” the site continues.

“This is a fraudulent website created by a man charged this week with child sex trafficking and lying to federal investigators to cover it up,” Omar’s spokesman Jeremy Slevin, said in a statement.

The site also says if Omar takes a DNA test herself they will give her $1 million dollars to do whatever she wants with, along with a red Ferrari, which has a license plate “ILHANDNA.”

Reactions to Lazzaro’s arrest were widespread across social media.

“MN GOP executive board members are planning to meet tonight. No agenda is available yet, though one member anticipates discussing the necessary charitable donation of funds received from Tony Lazzaro and a financial audit of the party’s finances,” said Mary McGuire.

The Independent Chronicle reached out to Congresswoman Omar for comment but did not immediately receive a response.