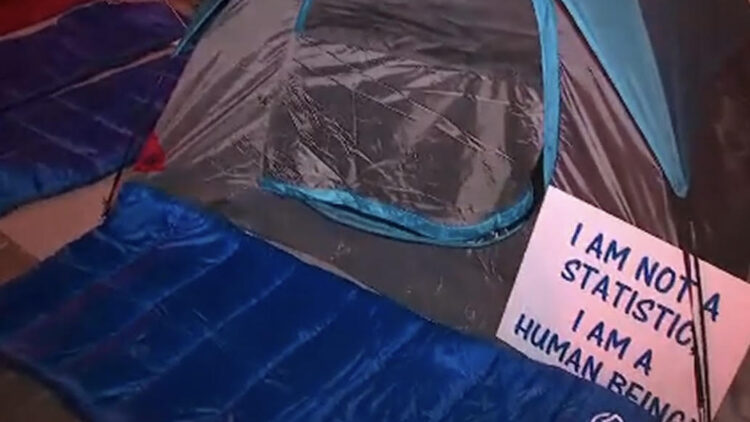 “This is where we’re going to be with the end of the federal benefits,” protester Lauren Crace said during the Friday morning demonstration. “We’re going to be sleeping on the streets, literally.” Crace, along with former transit industry worker Marculles Rowe, helped organize the protest in downtown Atlanta.

Similar to many, Rowe lost his job last year when the COVID-19 pandemic hit. According to the Department of Labor, over 200,000 Georgians are currently getting federal unemployment assistance through the COVID Relief Package. Protesters in Atlanta say they have looked for work but are unable to find it.

“We haven’t seen the labor participation rate change much since last October, even though we’ve seen more and more jobs open up across the state,” Department of Labor Commissioner Mark Butler said. “This year, we’ve seen record numbers of jobs being advertised across the state. We’re seeing a lot of jobs [that] used to pay less than $10 an hour, push up to $14, $15, $16 an hour; though, we’re still not seeing those jobs being filled.”

The Department of Labor reports that the state invested $12 billion in the last year to create over 35,000 jobs. Reports also show that 7,000 new jobs were added to the state in May and that 70% of jobs lost in March and April 2020 are available again. Overall, Georgia has 4,481,100 jobs available for unemployed people.

Georgia’s federal unemployment benefits program will expire this Saturday, and claimants will be required to actively seek work in the state moving forward.

24 other states across the country are also ending their federal UI benefits early, with Alaska, Iowa, Missouri, and Mississippi having ended their programs as of June 12. In total, about 3.9 million Americans will be impacted by the early termination of federal benefits. Four states-Alaska, Arizona, Florida, and Ohio-are only ending the $300-a-week payments but are keeping other programs intact. Four other states-Arizona, Montana, New Hampshire, and Oklahoma-are incentivizing people to return to work by offering a return-to-work bonus between $500 and $2,000.

No Democrat-led state is terminating federal UI benefits early, leading to further criticism of Republican governors. In Maryland, Governor Larry Hogan (R) is the target of a class-action lawsuit filed by the Unemployed Workers Union due to his decision to end the federal UI program on July 3. The plaintiffs in the case are six Maryland workers who say they are entitled to withheld benefits. The Biden administration, however, seems unlikely to intervene in any court proceedings against the states, as Jen Psaki told reports early this month that Republican governors have “every right” to end federal benefits programs early.

“But it’s going to expire in 90 days. That makes sense, it expires in 90 days,” Biden told reporters in early June, hinting that his administration will not prolong any of the federal UI benefits programs; despite a report issued by the Joint Economic Committee stating that early termination of the programs will take over $755 million from UI beneficiaries on average.