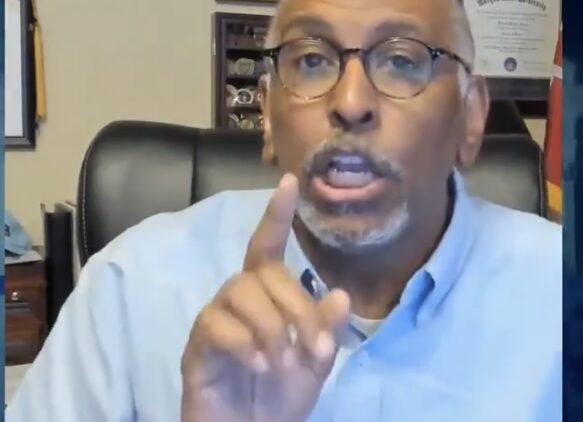 Former Republican National Chairman Michael Steele (R) called Congressman Jim Jordan (R-OH) a “son of a b****” after the congressman said he wasn’t certain whether he spoke to former President Donald Trump on January 6.

“I can tell you the time, the place, the date of every conversation I’ve had with every president of this country, period. Going back to Bill Clinton, I can tell you where I was, I can tell you what was said,” Steele said during a Thursday livestream for the Lincoln Project – a now-scandalized group of “Never Trump-ers.”

Now, Rep. Liz Cheney (R-WY) says Jordan may be called to testify about his comments.

“He’s somebody who was involved in a number of meetings in the lead-up to what happened on 6 January, involved in planning for 6 January, certainly for the objections that day, as he said publicly,” Cheney said during a “Good Morning America” appearance Tuesday. “So he may be a material witness.”

Late last week, Jordan and Indiana Rep. Jim Banks (R) were blocked by Speaker Nancy Pelosi from serving on the Jan. 6th commission after Minority Leader Kevin McCarthy appointed them and three others. McCarthy subsequently pulled the other three appointees and left Cheney and Rep. Adam Kinzinger (R-IL) to serve on the commission. Both Cheney and Kinzinger have drawn criticism from Republicans for their anti-Trump bias, and Cheney is now facing a challenger that may cause her to lose re-election next year.

RELATED: 77% of WY Republicans say they will not vote to re-elect Liz Cheney: Poll

Michael Steele has not addressed his comments further, though he is planning to run for governor of Maryland. His involvement with the Lincoln Project comes just five months after the organization’s founder was credibly accused of sexual harassment by 21 young men.