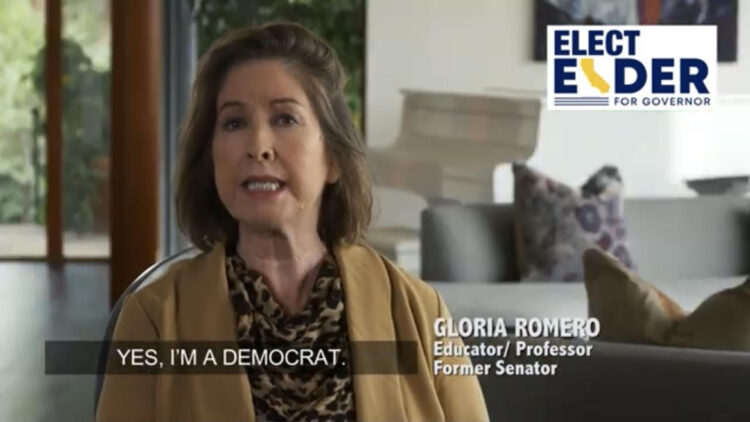 “Yes: I’m a Democrat. But the recall of [Gavin] Newsom is not about political party. It’s about Newsom. Larry Elder for governor,” former Majority Leader Gloria Romero (D-CA) said in an ad for Elder’s campaign. Romero then criticizes Newsom’s decision to shut down public schools in the state.

“Our public schools need big change. I’m Gloria Romero; I was the majority leader of Democrats in the state senate. I believe in charter schools and school choice. So does Larry Elder – but not Gavin Newsom. He shut our public schools while he sent his kids to private schools,” Romero added.

Romero served as the Democratic majority leader from 2001 until 2008 when she stepped down to become chairman of the Education Committee.

Reporters covering the California recall efforts say the ad will air in “nearly every major media market” in California.

Rosenhall also pointed out that Romero, a Latina, frequently criticizes members of her own party.

“Romero has long defied political norms by criticizing leaders of her own party, and many political insiders dismiss her as an oddball,” Rosenhall wrote in another tweet. “But voters will likely see this ad with a different lense: A Democrat (& a Latina) calling out Newsom’s hypocrisy on school closures.”

A recent CBS News/YouGov poll conducted among almost 2,000 Californians shows that 54% of registered voters oppose the recall while 46% oppose it. However, among likely recall election voters, the race tightens to 52% opposition and 48% support. Should he be elected, Larry Elder would be the state’s first Republican governor since Arnold Schwarzenegger’s election in 2003.

Larry Elder’s team has not yet responded to the Independent Chronicle’s request for comment.