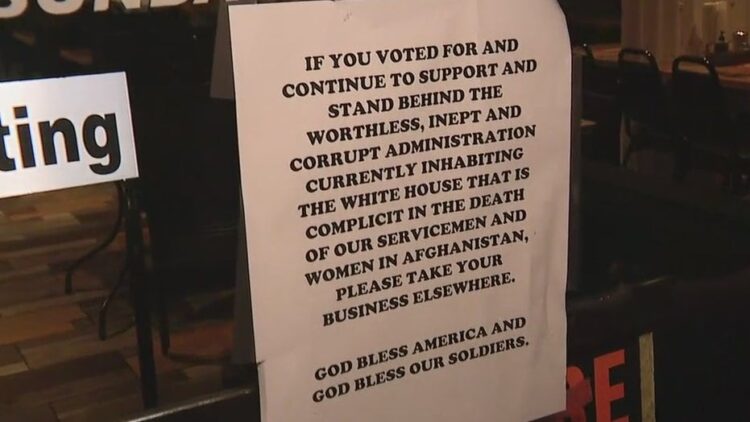 The owner of the DeBary Diner in DeBary, Florida, is asking those who support President Biden’s botched withdrawal of U.S. forces from Afghanistan or those who voted for him to take their business elsewhere.

“If you voted for and continue to support and stand behind the worthless, inept and corrupt administration currently inhabiting the White House that is complicit in the death of our servicemen and women in Afghanistan, please take your business elsewhere,” reads a sign posted on the Diner’s front door.

Owner Angie Ugarte says she was infuriated when she found out 13 U.S. service members were killed in Kabul during the Biden administration’s botched withdrawal from the country.

“It was the only thing I felt like I could do,” Ugarte said in an interview with local media. “I was just angry. I was just let down. I felt like one of those mothers, or wives, or sisters who were gonna get that knock on the door,” she explained.

The sign on the Diner’s front door ends with “God bless America, and God bless our soldiers.” Ugarte says most of her regular clientele are military veterans who enjoy coffee at her establishment almost every morning.

“If you really, really still stand behind what’s allowed this to happen and the way it happened – which was unnecessary, then I really don’t want to be associated with you in any way, and I certainly don’t want your business,” she continued.

Ugarte says she plans on leaving the sign up for the foreseeable future, pointing out that there are still Americans stranded in Afghanistan.

“I wouldn’t go there. I don’t appreciate it,” resident Louis Vasquez told local media about the sign.

“She has the right to not let anybody in the restaurant that supports a certain view,” said another resident, Serenity Smith.

The anti-Biden sign comes as the Taliban officially took over Afghanistan after the U.S. pulled out on Aug. 31, marking the end of a war spanning two decades. Last week, a suicide bomb attack killed 13 U.S. service members outside the Kabul airport.

President Biden has taken criticism from both sides of the aisle over his decision to withdraw all troops from Afghanistan by Aug. 31 and for trusting the Taliban to create a safe passage for Americans and Afghanis to the Kabul airport for evacuation.