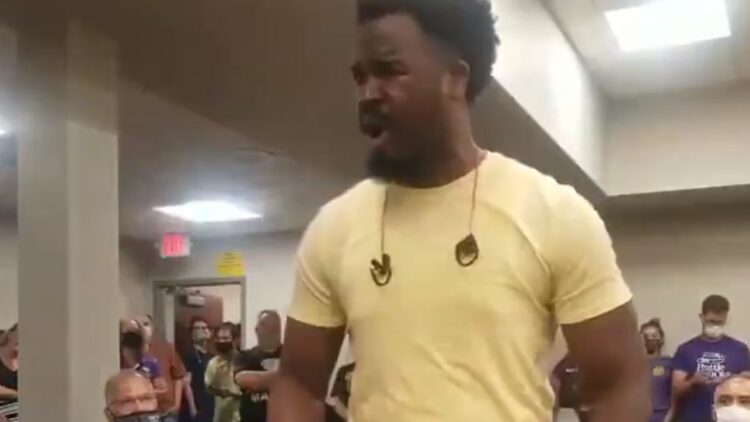 Ty Smith, a father of two teenage boys spoke at his local school board meeting and rebuked critical race theory while warning other parents that the ideology must be stopped.

“When you talk about Critical Race Theory, which is pretty much gonna be teaching kids how to hate each other, how to dislike each other … it’s pretty much what it’s all going to come down to,” Smith began his speech.

“You going to deliberately teach kids, this white kid right here got it better than you because he white? You going to purposely tell a white kid, ‘Oh, the black people are all down and suppressed.’ How do I have two medical degrees if I’m sitting here oppressed?”

Smith received praise from the crowded room of fellow parents who shared the same concerns as him regarding what their children are being taught in school and how they’re being taught to view people of color.

“Two medical degrees. No mom, no dad in the house. Worked my way through college, sat there and hustled my butt off to get through college,” he continued. “You going to tell me somebody look like all y’all white folks kept me from doing it? Are you serious? Not one white person ever came to me and said, ‘Well son, you’re never gonna be able to get nowhere because, you know, the black people.’”

“Well, how did I get where I am right now if some white man kept me down?” he added. “How am I now directing over folks that look just like you guys in this room right now? How? What kept me down? What oppressed me? I worked myself from off the streets to where I am right now, and you’re going to sit here and tell me this lie of Critical Race Theory? Of this, the reason why black folks can’t get ahead because of white folks? Are you kidding me? This is what we’ve come to? I can’t believe we even talking about this right now.”

Smith then brought up the legacy of Dr. Martin Luther King Jr., who he says would not approve of critical race theory based on King’s plea to judge others based on the “content of their character” not their skin color.

“Martin Luther King said he wanted his kids to grow up in the world where they are judged by the contents of their what?” Smith asked the audience which they quickly replied in unison: “character!”

“Their character. Not their skin. If they letting this stuff go on right now, it is absolutely doing the complete reverse of what he’s doing, so when February comes, don’t talk about Martin Luther King. When February comes, don’t talk about black history month if y’all going to sit there and pretty much just pee on his grave with this nonsense. That’s exactly what’s about to happen,” he went on.

“Lastly, we are talking about our kids. We are talking about our children and what’s so [inaudible], I love the Discovery Channel, you will see that on Discovery Channel, animals will put their lives on the line to protect their children from danger,…the ones [who are] going to be hurt from this is the kids. Ten years from now if this stuff goes on … who’s fault is it going to be? Who’s fault is it going to be? Who we going look back on and blame for this?” Smith asked rhetorically.

“Because this is stuff we talking about right now; this stuff is going on right now. I do this stuff on a daily basis. I’m in the hood, I’m in the communities, I’m out there with folks in their face, I’ve been doing stuff since I was 18 years old, talking to black folks. And you know what? None of them are buying this nonsense,” he said.

“But if you want to implement this into the school system, I guarantee you to the day that I die, I’m going to be the very person right there debunking this stuff, tearing stuff down, letting them know they can do exactly what I did and get exactly where I am by putting themselves to work and getting their [inaudible] … not one white person ever going to keep any of them from getting there. So CRT stuff, BS,” he finished.

“Watch this parent absolutely obliterate Critical Race Theory at an Illinois school board meeting: “How do I have two medical degrees if I’m sitting here oppressed?”

The father’s speech comes after a wave of mothers has gone viral for their anti-CRT speeches in recent weeks. One mother who escaped Mao’s China gave a blistering rebuke of CRT and compared it to the Communist country’s Cultural Revolution which led to the deaths of hundreds of thousands, if not millions, of Chinese during the 1960’s and 1970’s.

“I’ve been very alarmed by what’s going on in our schools,” Xi Van Fleet told the Loudoun County School Board members. “You are now teaching, training our children to be social justice warriors and to loathe our country and our history.”

“The Communist regime used the same critical theory to divide people,” she said. “The only difference is they used class instead of race.”