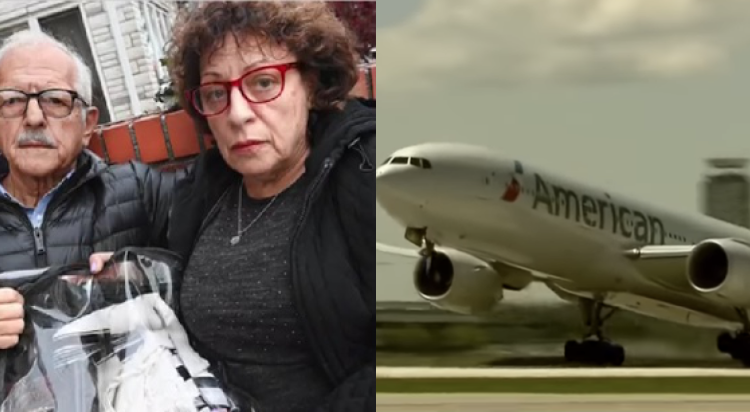 Roberto and Elena Birman are suing American Airlines after a flight attendant allegedly disrespected their religious objection to a prayer shawl being placed on the floor underneath their seat.

“The Birmans were confused, deeply humiliated, disrespected, lost, perplexed, and at a complete loss. Mr. and Mrs. Birman were being discriminated against because of their race, religion and nationality and before a planeload of other passengers,” the lawsuit reads.

Roberto, an Orthodox Jew, brought his prayer shawl on board the aircraft in his 8.5-inch-by 8.5-inch clear Tallit bag. An unnamed flight attendant  allegedly told him he needed to place the bag on the floor under the seat.

“It’s a religious item, it cannot go under the seat,” Birman told her, according to the lawsuit.

“It’s considered disgraceful,” Rabbi Mitchell Rocklin explained. “It would be like taking a Bible or a Koran and dumping it on the floor.”

The attendant yelled at him after telling him that it didn’t matter. “She was screaming at me and pointing her finger,” he said.

RELATED: Airline passenger tackled by security after someone mistook his vintage camera for a bomb

The couple has been married for 52 years and moved to the US in 1985 from Argentina. “I couldn’t believe this was happening to me in America,” Roberto said. “We use these items every single day to pray.”

Elena, 71, said her husband “was devastated.”

“Nobody said a word,” she said. “Nobody defended us. It was embarrassing.”

The lawsuit alleges that the Birmans “were ejected from the flight based on the prejudices and complete lack of sensitivity of airline employees and agents for reasons wholly unrelated to security.”

In addition, when they were removed from the plane, they were unable to access Roberto’s diabetes medication in his suitcase which was still aboard the aircraft.

“What are we, criminals?” Elena asked. “I was shaking,” Roberto added.

“The safety and comfort of our customers are our highest priorities and we’re committed to providing a positive, welcoming experience for everyone who travels with us,” American Airlines spokesman Matt Miller said.

The couple is suing American Airlines for unspecified damages.