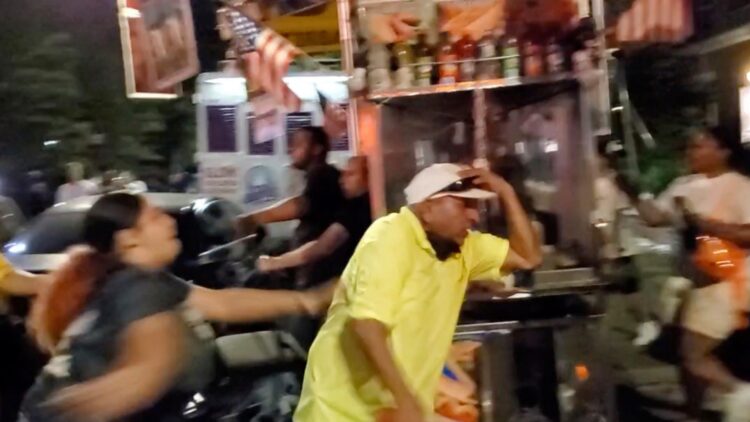 Nader Hassaneen, a 66-year-old Egyptian immigrant, was punched in the face several times as a gay pride month celebration was taking place in New York City.

“I have a broken nose. They say I might need surgery,” he said. “When I saw the blood in my cap, and I was bleeding from my nose, I thought I was going to bleed to death.”

Hassaneen said that the melee broke out after a woman yanked an American flag off the food cart, demanding it be replaced with a pride flag. “I was videotaping it and telling her she shouldn’t do that,” he added. “My friend asked her, ‘Why did you do that?”

After his friends questioned the woman, someone else started throwing hot sauce on the victim and the brawl ensued.

“My eyes were burning,” Hassaneen, who has a heart condition, said, explaining that the attackers smeared hot sauce in his face. “A lot of people were hurting me and pushing me around. They punched in the back of the head.  I didn’t know I was bleeding.”

“I felt safe because the cops were around. There were about 30 or 40 cops near the arch,” Hassaneen said. “But I was scared when they came at me. There were a lot of people coming at me at the same time.”

When asked about allegations that someone from Hassaneen’s cart yelled a gay slur, he said, “I would never do that. I don’t have a problem with them.” “I know it was their parade. It was their day. They came out to have fun and enjoy themselves.”