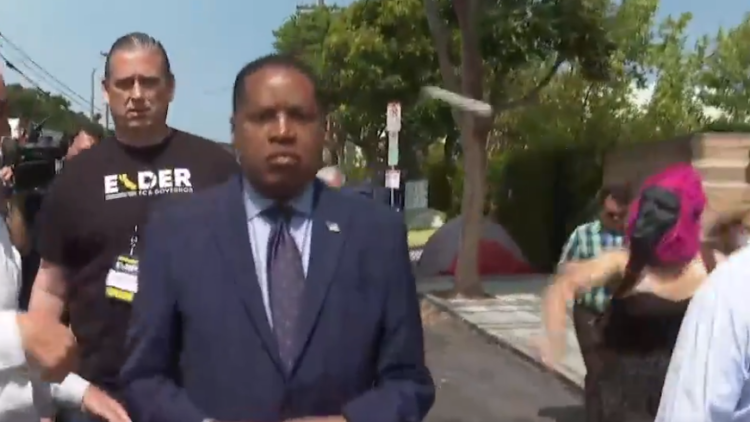 An individual was caught on tape throwing an egg at California gubernatorial candidate Larry Elder narrowly missing the back of his head before assaulting multiple campaign members.

“Breaking: A flying egg narrowly missed the back of recall candidate @larryelder‘s head after it was thrown by an activist wearing a gorilla mask in Venice. A scuffle broke out, and the candidate was escorted into an SUV,” local reporter Kate Cagle tweeted.

Elder appears unphased by the attack as he calmly walks away, not even looking back, before being escorted into an SUV and leaving the scene.

A man with Elders entourage approaches what appears to be a female wearing a gorilla mask on a bicycle. A small scuffle ensues after the man is punched in the face by the person wearing the mask.

“You better take your hands off me, motherf—er” the unidentified female is heard yelling at the man. “Touch me again! Touch me again!” she yells before hitting Elders staff member in the face.

A man then walks up to Elders staff member uttering words that are inaudible while clenching his fists. Moments later, another person slams an egg off the side of the man’s head. Elder’s entourage walks away while people yell, “I’ll beat the s–t out of you!”

A black man appears on camera briefly before the video ends, saying, “He can’t get nothing done!” “Democrats control everything!” the man adds.

If elected, Elder would become the first black governor of California. He is considered the leading Republican challenger to Democratic Governor Gavin Newsom in this month’s recall election.