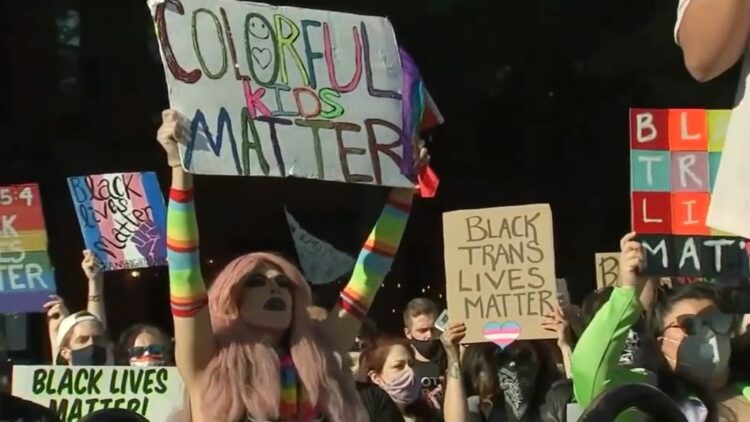 The goal of the march is to raise awareness for defunding the Chicago Police Department by 70% and diverting those funds to “social services” and “community programs.” The marchers also demand police officers be banned from pride parades and events in the city.

“I was just like let’s do this. Let’s get all my drag brothers and sisters together and try to make a change,” said Jo MaMa, otherwise known as Joe Lewis.

Jo MaMa spoke to the crowd of marchers before they began saying, “We march today in support of all Black lives, and we remember where we came from because the first [Pride march] was … what?” “A riot!” the crowd fired back, referencing the 1969 Stonewall riots which sparked nationwide gay rights movements.

“Unless we do radical change, nothings gonna change,” said marcher Michael Corry to local news. Protesters held signs that said, “No pride for one of us without liberation for all of us.”

One marcher was seen with a rainbow flag with the numbers “666” embroidered on it, surrounded by images of pot leaves.

“As a black man, it’s very important for us to be here supporting LGBTQ community because it’ll help us understand how we all intersect and overlap,” said marcher Troy Gaston.

The march ended with a number of guest speakers addressing the crowd. One of which was drag performer Lucy Stoole, who told the crowd to commit to doing this work for “the rest of your life.”

“I don’t care if it’s calling out your racist auntie at Thanksgiving dinner,” Lucy Stoole said, calling for activists to confront those who they perceive as racist. “We’re not even close to being done,” Lucy Stoole said.