DeSantis slams Biden for ‘importing’ COVID-19 into the U.S. with open border 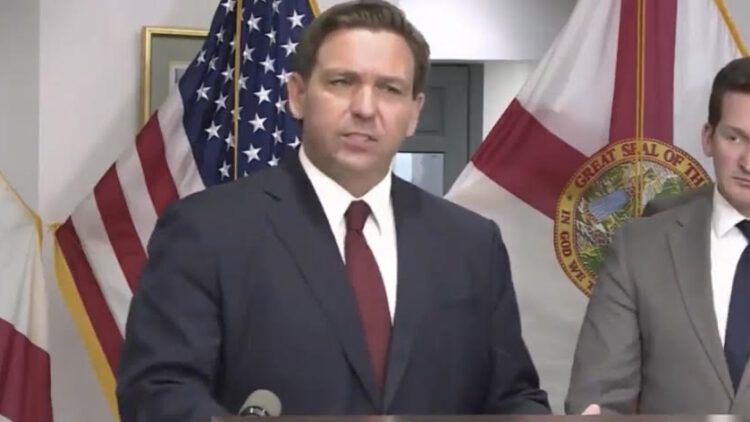 “This is a guy who ran for President saying he was gonna [sic] quote, ‘shut down the virus,’ and what has he done? He’s imported more virus from around the world by having a wide-open southern border…you have over a hundred different countries where people are pouring through,” DeSantis said. “You think [the Biden administration is] worried about Covid for that? Of course not…so he’s not shutting down the virus, he’s helping facilitate it in our country.” DeSantis then went on to denounce Biden over lockdowns and mask mandates.

“Joe Biden suggests that if you don’t do lockdown policies then you should quote, ‘get out of the way.’ But let me tell you this, if you’re coming after the rights of parents in Florida, I’m standing in your way,” he added.

“He wants to have the government force kindergarteners to wear masks in school. He doesn’t believe the parents should have a say in that, he thinks that should be a decision for the government. Well, I can tell you that in Florida, the parents are going to be the ones in charge of that decision.” DeSantis concluded the press conference by reiterating that he would not back down from a fight with Biden.

DeSantis’ press conference was met with both criticism and praise online, with many calling it a precursor to the 2024 election.

“DeSantis is leading the fight. He’s in a swing state, but has been more aggressive on policy than all the safe-red Republican governors in the country,” Chris Rufo wrote in a tweet. “Get this man into the White House in 2024.”

“Ron DeSantis is following the Trump model of getting into office on a fluke, fumbling everything, acting like an a**hole, pandering to a too-small base, wondering why his approval rating is dropping, and whining like a baby as he realizes he may lose re-election,” the Palmer Report wrote in a tweet.

DeSantis has not said whether he plans to run for president in 2024, though he has told press that he is “only focused” on winning re-election as of now. Biden, who turns 79 this year, says he plans to run, though many on both sides of the aisle say he will be too old to handle the job effectively in 2024. He has not yet responded to statements made during DeSantis’ press conference.