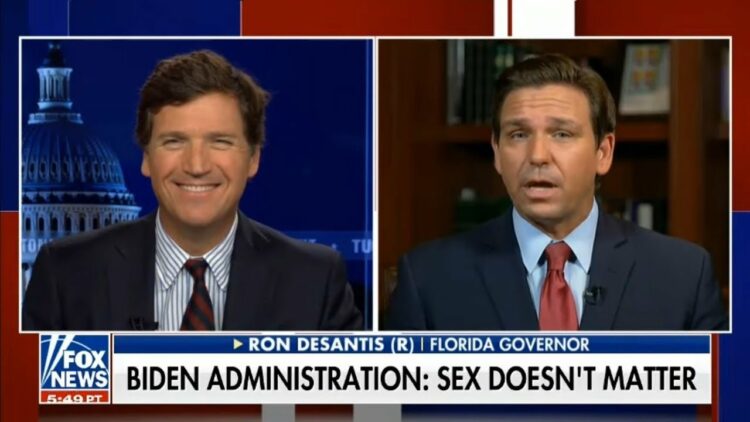 Florida Governor Ron DeSantis said he refuses to be pressured by “woke corporations” or any other organization displeased with his signing of a bill banning biological males from participating in women’s sports.

“I think as these bills were going through various legislatures, I remember the [National Collegiate Athletic Association] put out a statement saying any state that enacts this, we’re not going to hold events there and so I called the Speaker of the House in Florida and I said ‘Did you hear what they said?’ and he’s like, ‘Yeah’ and I said, ‘We’ve definitely got to get this done,’” DeSantis said in an interview on Fox News.

“You can’t be cowed by these organizations, particularly by woke corporations, from doing the right thing and so my view was throughout this whole time, we have to protect our girls,” he added.

The bill, titled the Fairness in Women’s Sports Act bans biological males from joining girl’s or women’s sports teams in all Florida schools and colleges. It also demands that a student’s school “request a certain health examination and consent form or other statement from the student’s health care provider to verify the student’s biological sex under certain circumstances.”

DeSantis called it “discriminatory” to force girls and women to compete with biological males. Doing so would “deny equal opportunity to hundreds of thousands of young girl and women athletes throughout Florida.”

Opponents decried the bill’s signing taking place on June 1, the first day of Pride Month. In response to those questioning the message being sent by the date of the signing, DeSantis said, “It’s not a message to anything other than saying we’re going to protect fairness and women’s sports.”

DeSantis signed the bill during an event at the Trinity Christian Academy alongside several teenage girl athletes. The bill’s sponsor, State Senator Kelli Stargel, said, “We all know that men are stronger than women.”

“Some of these organizations say they’re not going to hold events if you do this, just let me say very clearly, in Florida, we’re going to do what’s right, will stand up to corporations, they are not going to dictate the policies in this state,” DeSantis said. “We will stand up to groups like the NCAA, who think that they should be able to dictate the policies in different states.”