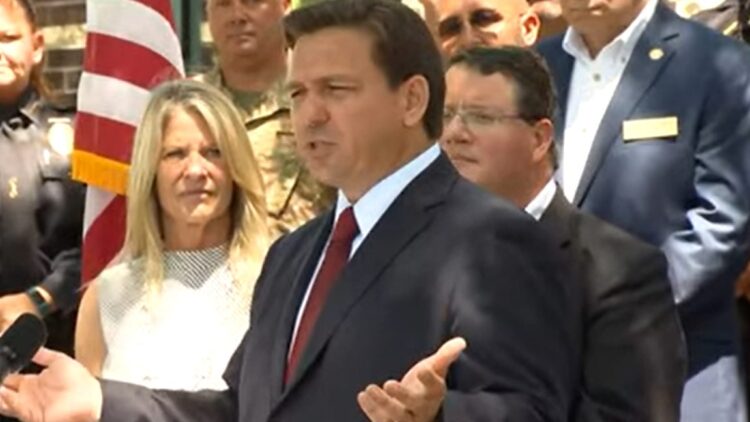 $1,000 checks will soon be coming for every sworn law enforcement officer, EMT, firefighter, and paramedic in the state of Florida, Gov. Ron DeSantis announced on Wednesday.

“Some want to defund the police,” DeSantis said “We’re funding the police and then some.”

“The legislature has passed and I will, when I sign the budget, which will hopefully be relatively soon, will sign into law, $1,000 bonuses for every sworn law enforcement officer, every EMT, every firefighter, and every paramedic in the state of Florida,” he added.

DeSantis first proposed direct payments for first responders in March while announcing his plan to use Florida’s federal relief funds. Now, he says qualifying recipients should see the $1,000 bonus checks arriving throughout the summer, as it will take some time to review and approve the state’s budget.

“They were out there, every single day, our police, our fire, our EMTs, and they had to work more than they ever have,” DeSantis said, referring to the strain on first responders during the pandemic.

The bonuses come as Republican-controlled cities and states begin to push back against calls to defund the police. Two weeks ago, DeSantis signed H.B 1, dubbed “the strongest anti-rioting, pro-law enforcement piece of legislation in the country,” which already has been challenged in court.

The new law creates stricter penalties for crimes committed during a riot or violent protest. It allows authorities to hold arrested protesters until a first court appearance and establishes new felonies for organizing or participating in a violent demonstration.

Under the new law, destroying or demolishing a memorial, plaque, flag, painting, structure, or other objects that commemorate historical people or events would be a second-degree felony. That would be punishable by up to 10 years in prison.

On Wednesday, police officers in Tucson Arizona were told they too would be receiving a pay raise after the City Council unanimously approved the largest raise the police department has ever seen.