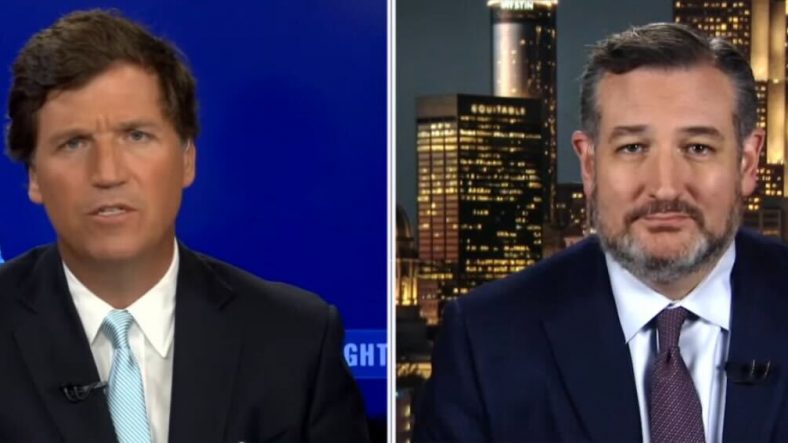 Senator Ted Cruz (R-TX) is getting a lot of heat from Republicans after referring to January 6, 2020 as a “terrorist attack,” and is now saying that his statement was entirely misunderstood.

“Yesterday, I used a dumb choice of words and unfortunately a lot of people are misunderstanding what I meant,” Cruz tweeted with a video clip of his conversation with Tucker Carlson.

The interview with Carlson was in response to a statement Cruz made on the Senate floor this week, saying Thursday was “an anniversary of a violent terrorist attack on the capital.”

“The snippet from yesterday didn’t include my passionate & repeated defense of the patriots and peaceful protestors supporting President Trump. I’m sorry that that 20-second clip led so many to misunderstand what I was saying,” he tweeted.

“I was NOT calling the thousands of peaceful protestors on Jan 6 terrorists. I would never do so; I have repeatedly, explicitly said the OPPOSITE—denouncing the Democrats’ shameful efforts to do so & to try to paint every Trump voter in America as ‘terrorists’ & ‘insurrectionists,’ Cruz continued.

“I was ONLY talking about the limited number of people who committed violent assaults on police officers. For over a decade, I’ve referred to those who violently attack police officers as terrorists.  If you assault a cop you should go to jail,” he said.

Carlson however, was not buying it. “There are a lot of dumb people in the Congress, you’re not one of them” Carlson confronted Cruz. “You never use words carelessly. And yet you called this a terror attack when by no definition was it a terror attack, that’s a lie,” he said.

“The way I phrased things yesterday, it was sloppy, and it was frankly dumb,” Cruz responded.

“I don’t buy that,” Tucker interrupted. “Whoa whoa whoa. I don’t buy that for a – look, I’ve known you a long time, since before you went to the Senate, you were a Supreme Court contender. You take words as seriously as any man who’s ever served in the Senate, and every word – you repeated that phrase – I do not believe that you used that accidentally.”

“As a result of my sloppy phrasing, it’s caused a lot of people to misunderstand what I meant,” said Cruz. “Let me tell you what I meant to say. What I was referring to are the limited number of people who engaged in violent attacks against police officers.”

This controversy comes amid widespread speculation that Cruz may be eyeing a 2024 presidential run. His name, along with Florida Governor Ron DeSantis, former President Donald Trump, former U.S. ambassador to the United Nations Nikki Haley, and others have been in the Republican spotlight as potential candidates.

Reactions are divided on Cruz’s apology. Some feel that the senator showed his true colors. Others accepted that it was just a poorly chosen turn of words and Cruz had no intention of branding all Trump supporters and peaceful protesters at the capital as “violent terrorists.”

“Well, Ted Cruz can kiss his Presidential hopes and dreams goodbye. It’s never a good idea to refer to your constituents as terrorists,” one person tweeted.

“Let’s hope every Republican learned a lesson tonight. If you go along with the Democrats playbook and talking points, you will be called out. Ted Cruz discovered we will not tolerate leaders on *this* side to once again mimic garbage propaganda by the Left,” said another.

“Let me give a heads up to the 10 million people asking me to blast my friend Ted Cruz,” tweeted Jesse Kelly. “1. I don’t publicly call out my friends. Ever. For any reason. Keep your squabbles in house. 2. We have like 3 good senators. You gonna just toss one cause he said one thing you hate?”