Cops, nurses go from heroes to villains as vaccine mandates cause some to quit their jobs 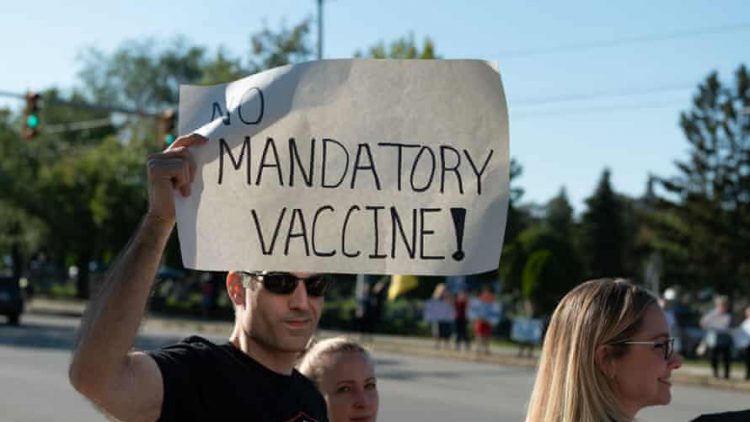 As sweeping vaccine mandates go into effect, vaccine-hesitant workers in law enforcement and nursing positions across the nation are rethinking their current jobs.

“We’re going to go down swinging on this topic if we have to,” said Joseph Moran, president of the Syracuse Police Benevolent Association (PBA) in New York. “I’ve had a number of officers approach me and make it absolutely clear that if a COVID vaccine mandate is imposed, they will retire or they will resign.”

More than half of the Syracuse, New York police department remains unvaccinated against COVID-19, and some officers have threatened to leave their jobs if the city mandates vaccines for its employees.

The Syracuse police union announced it would take legal action against the city if Mayor Ben Walsh instituted a vaccine mandate. Currently, city employees must either show proof of vaccination or be subject to weekly tests. Walsh previously stated that a full mandate is still possible depending on the infection rate in the city.

A whopping 84% of the police force in Syracuse oppose a vaccine mandate, while only 44% of the force is vaccinated.

“The PBA membership has a higher vaccination rate than the citizens we serve,” Moran said. “We would like to see the mayor focus his attention on his constituents and stop placing such an emphasis on the police department.”

Officers in Syracuse aren’t the only ones putting up a fight against vaccine mandates.

Earlier this month, an Oregon State Police trooper was placed on paid administrative leave after posting a video to Instagram claiming that it would not comply with Governor Kate Brown’s vaccine mandate.

“I have personal and religious reasons as to why I will not take the vaccine, but also the freedom not to,” Zachary Kowing, 29, said in the video. Kowing decried “unlawful” orders that threaten Orgeonians’ livelihoods during the video he recorded in his patrol car.

Kowing posted his video to his account thinblueline_patriot, where he describes himself as “pro-freedom” and a “Christian, a husband, a father and a police officer.” He does not, however, list where he lives or works.

He admits that he is “likely to be fired over this video, but I’m nonetheless exercising my First Amendment rights to speak freely.”

“I encourage you to look deep down and decide if you are going to fall in line as sheep or stand up for the rights we still have, while we still have them,” he added.

Portland attorney Dan Thenell said he can’t predict what action the State Police might take against Kowing for his video and refusal to enforce the mandates, adding that the agency must provide due process during an investigation that could take “several months.”

The deadline for state agency workers to get the vaccine or face possible dismissal is Oct. 18th.

“I think there are a significant number of troopers who feel similarly [to Kowing]” about the vaccine mandate, Thenell said.

Officers in San Francisco have also threatened to leave their positions after the city announced that its roughly 35,000 employees must all be vaccinated by Sept. 15 or face termination.

Health care workers across the country have also raised objections to vaccine mandates, with nurses who worked throughout the pandemic deciding to quit due to the mandates.

A hospital in New York was forced to stop delivering babies on Sept. 24 due to a nursing shortage caused by the vaccine mandate.

“If we pause the service and now focus on recruiting nurses who are vaccinated, we will be able to reengage in delivering babies here in Lewis County,” Lewis County, New York Health System CEO Gerald Cayer said. “We are not alone. There are thousands of positions that are open north of the thruway.”

Cayer said 30 nurses resigned in total, six of whom worked in the maternity unit. Seven others remain undecided as to their futures with the hospital.

A survey conducted by an Ohio nurses union suggests a significant number of nurses at one local hospital would rather quit than be required to get the shots.

Of the nurses surveyed at the University of Cincinnati Medical Center, 30% said they would quit their job if the hospital mandated the vaccine. The Ohio Nurses Association conducted the survey and said that 456 nurses responded, with 136 of them stating that a vaccine mandate would prompt them to quit.

President Biden’s sweeping vaccine mandate for employers with 100 employees or more was announced last week with immense opposition from Republican governors and officials across the nation.

The White House said the new mandate will affect nearly 100 million unvaccinated Americans. Businesses that do not comply will face fines up to $14,000 per violation, according to a White House official.