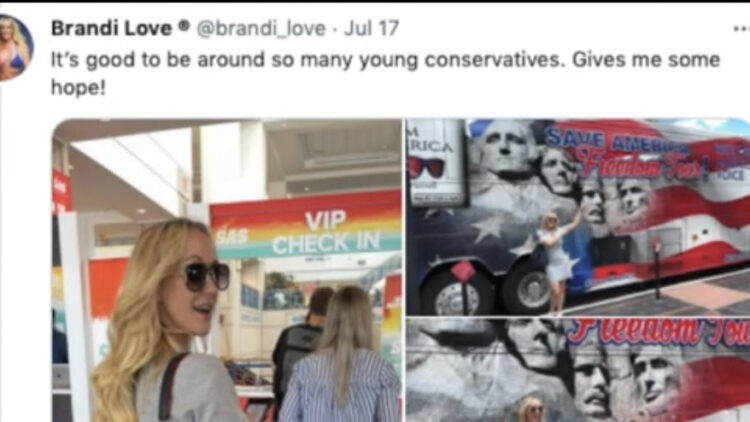 Upon arrival at TPUSA’s ‘Summer Summit’, a conference made up of mostly high school and college-aged students, adult entertainment star and Federalist contributor Brandi Love posed for pictures and was given VIP status. Drama broke out, however, after Love and another attendee appeared in a Snapchat photo together. The backlash intensified after America First Students leader Jaden McNeil posted a message identifying Love on Telegram.

Quickly following McNeil’s posts, Love was approached both in-person and online by “Groypers”, a loosely organized group of white nationalist supporters of podcaster Nick Fuentes. Shortly thereafter, mainstream conservatives began to voice their concerns as well, mostly in opposition to Love’s attendance, though others said she deserved to be treated with kindness.

Love was banned from the gathering on Saturday night in an email which she posted on Twitter.

“We regret to inform you that your [Student Action Summit] 2021 invitation has been revoked,” the email from TPUSA stated. “This decision is final. This revocation does not impact your application to future events, and we hope that you will consider applying again in the future. Please do not attempt to attend the summit as any attempt to disrupt may affect consideration for future participation.” Love was undeterred, though, and tweeted that the Republican Party is ‘broken’ due to her ban.

“I just watched Charlie Kirk, Dan Bongino, Rick Scott, [and] Kat Timpf, speak about freedom, censorship, how inclusive the “movement” is…and then they had me thrown out of the Turning Point USA conference,” Love tweeted. “The Republican Party is broken.”

“I’m disappointed that TPUSA kicked out Brandi Love for no reason whatsoever. She’s a Florida conservative businesswoman who loves America,” Domenech tweeted. “The right has an opportunity to be the big tent party. Don’t be a bunch of prudes. The new standard TPUSA has set for itself is that it will evaluate the moral quality of everyone who buys a ticket to their conferences. There’s no way that could go wrong.”

TPUSA’s Summer Summit is set to conclude on Tuesday, and Love’s ban is still intact as of Monday morning.