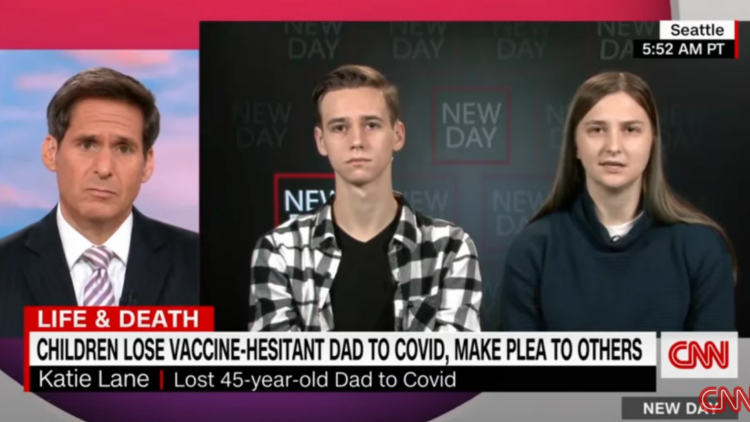 CNN interviewed a pair of teenagers who recently lost their unvaccinated father to COVID-19 and blame his death on vaccine misinformation, specifically from Fox News host Tucker Carlson.

“Katie, you said from one media source, in particular, he was getting misinformation — he was getting information that led him to be hesitant on vaccines. Who? Who was he listening to?” “New Day” host John Berman asked the grieving daughter, in reference to an answer she had given last week to a local news outlet.

“He watched some Tucker Carlson videos on YouTube, and some of those videos involved some misinformation about vaccines, and I believe that that played a role,” she replied.

Evan, Katie’s brother and son of the deceased, insisted that his father was simply waiting for the FDA approval of the vaccine. He claimed that if his father were alive today, he would have gotten the vaccine and most likely would have encouraged others to do so.

The children claimed that their father’s last words were that he “wished that he was vaccinated.”

“So he was going to wait for FDA approval, but by the time that Pfizer had been approved, it was already too late,” Katie said.

The children said their father was not “far-right” and watched many media outlets.

“There are multiple reasons, I think,” Katie said, when asked why her dad had not gotten the vaccine. “One of which was some of the media that he ingested. He wasn’t by any means far-right. He was right in the middle, and he consumed media from both sides, and just some of the misinformation on one of those sides made him hesitant.”

Patrick Lane, 45, was a Boeing designer and father of two. He died from COVID-19 last month around the same time the U.S. Food and Drug Administration gave full approval to the Pfizer vaccine. He reportedly had no underlying conditions and was considered healthy. However, shortly after being diagnosed with the virus, his health deteriorated quickly.

His children now are doing all they can to encourage others to get vaccinated.