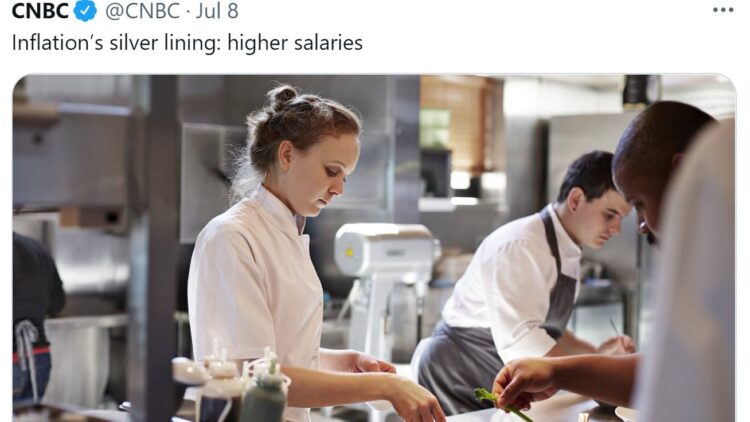 Shortly after the ridicule of the article began, the original article headline was updated from “the upside of inflation: higher wages” to its current wording which says “it’s not certain rising wages will be enough to outpace inflation.”

“I’m going to assume that y’all know this is bullshit and you’re propagandizing because this otherwise, this might be one of the stupidest things I’ve ever seen come out of a major news organization,” replied Brandon Morse.

“This article is both economically illiterate and ghoulishly evil. Why is @CNBC shilling for the Fed?” Said Geoffrey Miller.

“Hardly a silver lining. It’s just moving the bar. Their salaries will continue to pay for the same things as before. The downside would be if they moved into a higher tax bracket,” replied another.

The article says that fears of inflation are gaining steam, however, companies are offering higher wages in order to keep employees during the current labor shortage.

“However, incremental wage increases are unlikely to keep pace as the cost of living rises, cautioned David Weliver, founder of personal finance site Money Under 30,” the article states.

“There’s going to be a lag,” Weliver said. “The prices at the gas pump or grocery store may change very quickly but you might not get that raise for a year.”

Echoing Weliver’s sentiments, another Twitter user replied saying, “1. the salary increase generally come months after the increased price of goods and services 2. the salary increase is almost never enough to cover the entire amount of inflation. this might be the dumbest article you’ve ever posted.”

The mocking didn’t stop there.

“Are you guys missing some chromosomes? Or maybe you have too many? There is no silver lining to inflation. Sure you’ll get paid $20 an hour min wage but a gallon of gas is going to be $10, a gallon of milk will be $15, a loaf of cheap white bread will be $10,” said another.

“For the next article, how about: ‘Earthquake’s silver lining: more construction jobs,'” wrote another.

“Those salaries in Zimbabwe are off the charts!” Joked Preston Pysh.