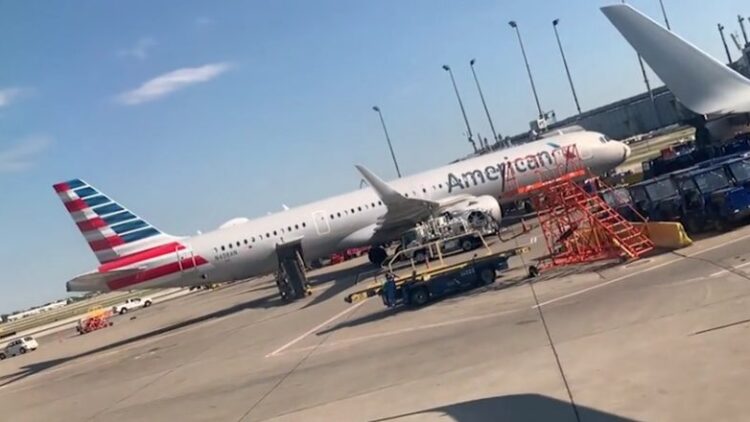 A Christian pilot gave a very personal and graphic 3-minute speech over a loud speaker about his sexual preferences and past sexual abuse as his passengers waited to disembark the American Airlines flight.

“I had sex with men and would come home [to my wife] from work trips and pretend that nothing happened,” he told shocked passengers, adding that he then met someone who helped him. “I want to share the love of Christ with you,” he said.

RELATED: Teacher’s Onlyfans account exposed by cheating ex-husband: ‘You got what you deserve’

The flight had been delayed over three hours and when it finally landed, the pilot took the opportunity to address the passengers. “I was raped and molested as a young boy,” he began the speech. “It does not matter whether it was family member or friend or stranger, it happened.”

“Even though I was raised by Christians in a church I never felt like I could share that with anyone, I screamed to God that he would take away my sins and thoughts and resulting homosexual tendencies,” he continued.

“I was left to deal with it alone,” he said, and described how his adult life spiraled out of control because of it. “I became a sexual addict and turned to pornography,” he shared, saying that he fought with his family and struggled with thoughts of suicide.

“I even started thinking of ways to end my life so that I would not hurt anyone else. After high school I moved over 1,000 miles from my home to help my grandparents,” he said, adding that he survived by performing. “Perform at school, perform at work, perform amongst friends and family. Every aspect of my life was filled with lies.”

“I got married to a woman almost five years ago, I could not tell her about my pain. I have struggled with homosexuality, even though I was in love with her. Just over one year into our marriage I began to give in to the pressure of being gay,” he said, “Pretty soon I was taking part in that lifestyle.”

The pilot was eventually interrupted by an irate passenger, screaming obscenities. “F*** you and your story. F*** you… We’ve got lives to live. Hey man… figure it out… I don’t give a sh*t about you!” A passenger is also heard telling the pilot, “I’m going to sue your ass.”

“I’m sorry if you’re uncomfortable, I just want you to hear me,” the pilot reassures passengers at one point.

The unidentified pilot offered to speak to passengers in the gate area, presumably to continue discussing his personal story and his faith.