Chris Wallace slammed for calling Jen Psaki ‘the best ever’ 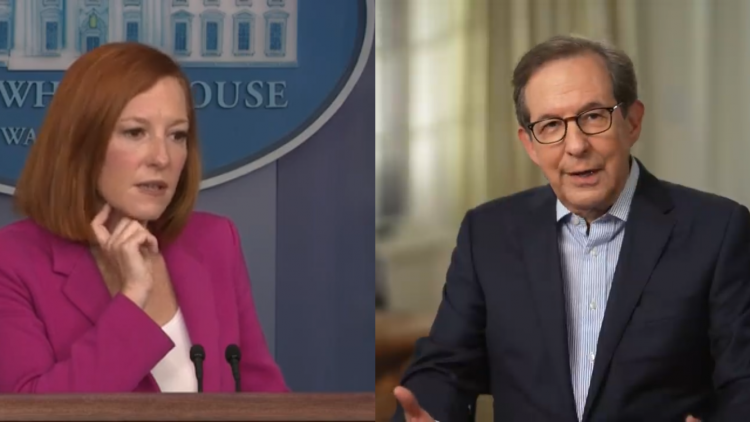 Fox News’s Chris Wallace, who worked as a White House press correspondent back in the 1970’s, is being slammed for praising White House Press Secretary Jen Psaki for being one of the most elite in her field.

“Jen Psaki, I think, is one of the best press secretaries ever,” Wallace said while on air with John Roberts and Sandra Smith.

Wallace’s comment came as the three discussed the most recent spar between Jen Psaki and reporter Peter Doocy over President Biden visiting the southern border.

“She won’t answer questions.  When she’s not avoiding questions, she’s condescending.   We have the least communicative administration ever and Chris Wallace is applauding them.  Yep, journalism is dead,” Eric Norden tweeted.

“Today I learned that Chris Wallace has never seen a White House press briefing before today since he thinks Jen Psaki is the best Press Secretary he’s ever seen. Everyone is entitled to their own opinion, even activists posing as journalists, but that is a bold statement,” Danny Tarkanian said on Twitter.

“Chris Wallace: ‘Jen Psaki is one of the best press secretaries ever’ TURN OFF FOX NEWS,” tweeted Brigitte Gabriel.

“This is the dope Chris Wallace thinks is fantastic,” said one Twitter user, posting a video clip of Jen Psaki’s answer to Peter Doocy’s question on why President Biden claimed this week that he has visited the southern border.

Others posted examples of times when Psaki contradicted herself and President Biden on statements and policy stances.

“Hey @POTUS remember this? Hey @PressSec what happened here? I’ll circle back. #WHATHAPPENED#AuditAll50States,” one person tweeted with a meme on Biden’s contradictory actions on the “Remain in Mexico” policy.

“Jen Psaki told me $3.5 trillion wont cost tax payers a penny Now it’s decreased by $3.2 trillion and somehow costs me $1 ?? I think someone needs to circle back,” someone else commented.

“Chris Wallace needs to circle back to CNN.

“Wait, I thought @PressSec said that would be absurd. Jen, can you circle back on that?” queried one person.

“Didn’t Circle-Back Psaki have a Hatch Act complaint filed against her for saying Admin was going to help Terry [McAuliffe]? It appears the admin doesn’t care about the rules as long as they win. Because they can sweep the complaint away like Trump? Say not like Trump, but do same things!” tweeted another person.