Chris Cuomo gets into heated exchange with restaurant owner over masks: ‘You sound like an idiot’ 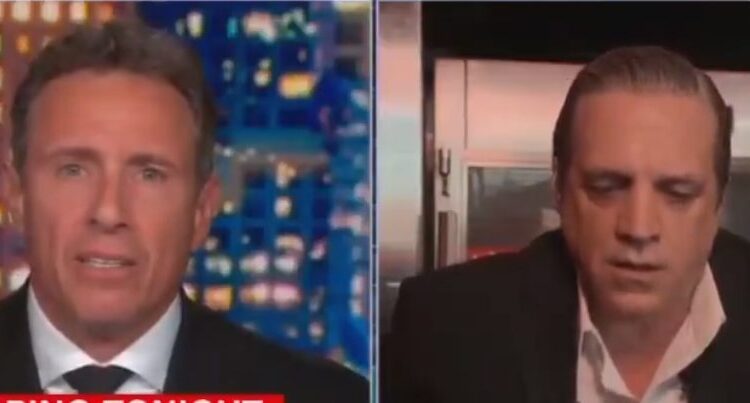 CNN anchor Chris Cuomo got into a heated exchange with a guest who requires “proof of being unvaccinated” at his restaurant.

“The whole reason this is happening is because people won’t protect themselves, Tony, I mean, what are you thinking?” Cuomo asks Tony Roman, owner of Basilico’s Pasta e Vino, about his policy which bans masks in his restaurant.

“Then why did you leave your house when you had COVID? I mean, you had it, and you left your house. It’s been documented, right, so why don’t you answer that?” Roman responds.

“I know you don’t know, so I’m trying to help you,” Cuomo responds.

“I don’t want you to get sick the way I was sick,” Cuomo says.

“The science is clear? Oh, you care about me all the sudden, huh?” Roman says in return.

“Enough to have you on the show because I don’t like people making bad decisions for themselves and their family. I was hoping it was a little bit of a stunt. You have the freedom not to take the vaccine. I just don’t know why you think it’s a good move,” Cuomo says.

“Maybe we should ask your brother about protecting people, right? I mean, that’s a whole new can of worms,” Roman says.

“Hey, look, that’s his job, and if he doesn’t do it well, people won’t vote for him. Look, Tony, I don’t know if you know me too well. I don’t shy away from much I’m asking you about you,” Cuomo fires back.

“Yeah, good, I appreciate that because I know you talk a lot too,” Roman responds.

“My stance here is a pro-freedom stance only. It’s not political…If you come down here, you’re not gonna see a Trump flag flying over the roof…You’re only going to see pro-freedom messages, and that’s it…You’re not going to drag me down the hole talking about the science. This is not about whether I’m pro-vaccine or not. I’m pro-freedom, anti-tyranny, okay? Maybe the conversation should really be between me and your brother. That’s what I’m thinking.”

“Maybe so, you’re pro-freedom, but people can’t wear masks. Tony, it doesn’t make sense. It really doesn’t. I gave you a chance to make the case. I wish you well I hope your family stays safe,” Cuomo says.

“I mean, honestly, you sound like an idiot, so there’s not much to say. But Tony, good luck with it,” Cuomo says.

“So do you,” Roman replies.

“Only for having you on the show. That was my only mistake,” Cuomo says.

“BOOM: CA restaurant owner calls out Chris Cuomo for breaking quarantine when he was infected with COVID last year. Fredo claimed he “quarantined” but added: “I went out.” The restauranteur then called out Gov. Andrew Cuomo for killing New York nursing home residents,” tweeted Nicholas Fondacaro, an analyst for Media Research Center and News Busters.

“Holy. Just seeing this now. @ChrisCuomo finally gets called out for his fake quarantine AND his brother @NYGovCuomo not protecting the elderly. This is like Christmas,” replied Fox News Senior Meteorologist and nursing home rights activist Janice Dean.

“With freedom always comes responsibility, and this guy is doing everything to deflect from why (when so many in the world would grovel for a vaccine) he’s encouraging irresponsibility,” replied another Twitter user.

The debate over masks was reignited this week after the Centers for Disease Control and Prevention issued new guidelines Tuesday that recommend indoor-mask mandates even for fully vaccinated people in areas experiencing spikes in COVID-19 infections.

“In areas with substantial and high transmission, CDC recommends fully vaccinated people wear masks in public, indoor settings to help prevent the spread of the Delta variants and protect others,” CDC Director Dr. Rochelle Walensky said at a press briefing.